A lot of the cats at the San Francisco SPCA have had beat lives. Living in backyards, alleys, and abandoned buildings, they have been deserted by their families. Some of the female felines are impregnated and left to care for their litter. And yet these creatures still persevere. They lead dignified lives full of spirit and love. They are open and ready for new relationships at a moment’s notice, much like the Beats. For example, Jack Kerouac, Neal Cassady, and Allen Ginsberg all fall in love with multiple people in the beloved Beat bible, On the Road. These cats, more importantly, are survivors. They have lived outside of society, looking in, observing, and wanting to be part of it.

In honor of our current exhibition, Beat Memories: The Photographs of Allen Ginsberg, the Contemporary Jewish Museum (CJM) and the SF SPCA partnered together to reflect on the Beat generation through a feline prism. The connection is natural as Ginsberg, Kerouac, and Burroughs all owned and were photographed with their cats. Kerouac mourned deeply after his cat died. And Burroughs wrote a book solely on cats, titled, The Cat Inside.

Kerouac traveled the United States multiple times, mostly with his friend Neal Cassady. And while Kerouac loved the romance of the road and movement, he was not comfortable with driving, so he was ever the passenger and hitchhiker. Searching for meaning in a world of conformity, Kerouac saw the road as a holy place, one that he often went to for communion. 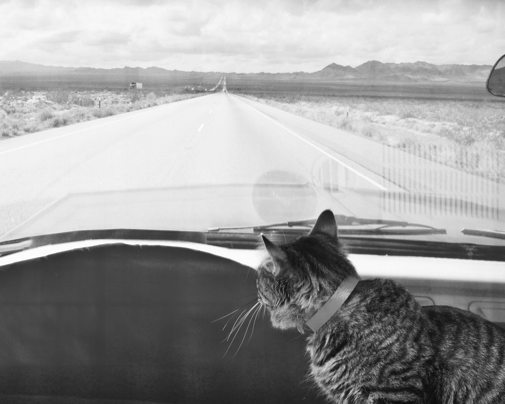 Kerouac always carried a notebook to record his thoughts and those of his friends. He used those notes and typed On the Road in three weeks. 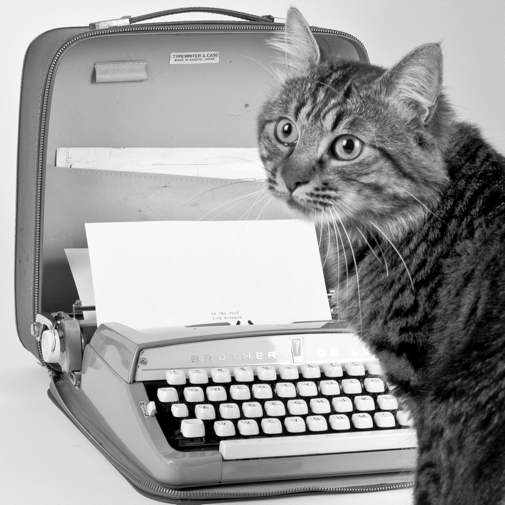 Burroughs was a skinny southern gentleman. A man of leisure and heroin addict, he wrote Naked Lunch, Junky, Queer, The Nova Trilogy, and And The Hippos Were Boiled in Their Tanks. Kerouac writes, “In the evenings [Burroughs] sat at this table picking at his food and throwing the bones to the cats. He had seven cats. (On the Road, Kerouac, 252) Described as “wearing glasses, felt hat, shabby suit, long, lean strange and laconic . . . . he dragged his long thin body” (Kerouac, 244). 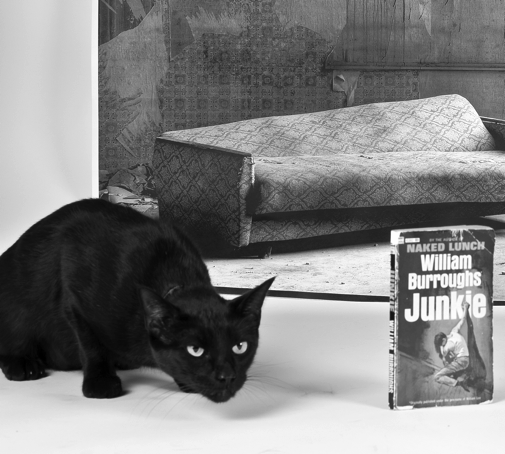 Thistle easily evokes Burroughs with his long limbs, quiet demeanor, and bony face with large protruding eyes. Poor Thistle had a hairball. We feared he was taking his role of Burroughs too seriously. He looked unwell for a moment and we feared he was going to vomit. But a true champion, he pulled it together, kept it all in, and we finished. Thistle then nodded out in front of the typewriter after the shoot.

Neal Cassady, the genesis of Kerouac’s life on the road, was authentic, mad, spirited, and inspirational. He was a tomcat, juggling multiple partners, both men and women. Cassady's alcoholic father was absent for most of his life and his mother died when he was ten so he was somewhat of an orphan. His passion drove those around him to create and follow him around the country.

Carolyn Cassady, Neal Cassady’s second wife, mother of three of his children, met him while getting her MA from Denver University. She lived with and considered Neal her husband while he was still married to his first wife, Lu Anne. Carolyn insists that their life was conventional, that Neal was dedicated to being a husband, father, and partner. But that was not the case: he was married to Lu Anne when Carolyn became pregnant and after he married Carolyn he had a child with Diane Hansen.

Poor Carolyn spent a lot of time waiting for Neal, wondering when he would return (he also worked as a brakeman for the railroad).

Angelique was the perfect model: she had beauty, poise, and attitude. She lent a graceful elegance to the photographs. Here she is thinking about a better place, wondering where her kittens’ father is.

Carolyn took the famous black and white photograph of Neal and Jack standing against a wall. She fought with Neal because Jack brought a prostitute into their home. They left and returned the next day, apologetic and shamefaced, and posed as Carolyn took photographs. Angelique is posing with a Kodak Retina, the same type of camera that Ginsberg used to take the photographs in the Beat Memories exhibition. 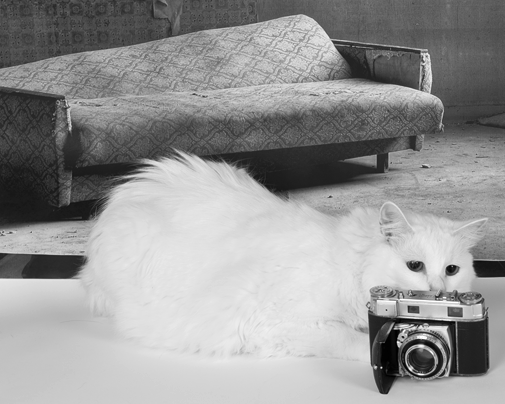 Like a cat, Allen Ginsberg had nine lives. He attended Columbia University; later joined the Merchant Marine; was a patient at the Columbia Psychiatric Institute; had brief relationships with Burroughs, then Cassady, and finally Peter Orlovsky; experimented with drugs; became a published poet; an anti-war demonstrator; and finally a Buddhist.

Ginsberg documented his friends with honesty and without judgment. His photographs are on view through September 8, 2013 at the CJM. 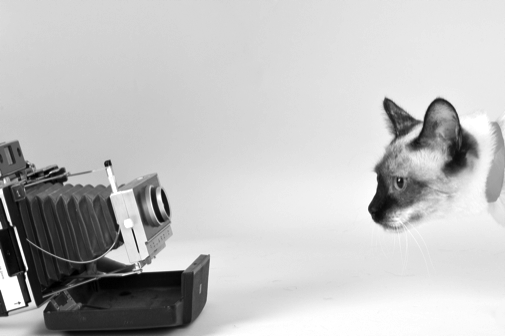 All of these cats have been adopted but there are so many more that need kind and loving homes. There is a cat to fit every personality type, the passionate Kerouacs, the sympathetic Burroughs, the loud and mad Cassadies, the patient Carolyn Cassadies, and the reflective Ginsbergs.

“All you cat lovers, remember all the millions of cats mewling through the world’s rooms lay all their hopes and trust in you, as the little mother cat at the Stone House laid her head in my hand, as Calico Jane put her babies in my suitcase, as Fletch jumped into James’s arms and Ruski rushed towards me chittering with joy.” (Burroughs, 92)

This project would not have been possible without photographer Rod Kilpatrick’s artistic eye and patient compassion. Alison Burek, SF SPCA Volunteer created a warm environment that allowed the cats to trust us and assisted with all aspects of the shoot. Additional thank you to Vince Donovan at Photobooth for lending us his Kodak Retina 1953.

About the Author
Melanie Samay studied literature at Fordham University in New York and received her Masters in English literature from San Francisco State University. Currently she works in marketing for the Contemporary Jewish Museum. She spends her time reading, walking around the city, sitting in the park with friends, and hanging around dark spaces at night listening to loud music. Read more from Melanie on her blog about books and book-nerdom: http://soifollowjulian.com
beat memories cats exhibitions melanie samay

Anonymous said…
One is never too old to read about and learn about "The Beat Generation".
I look forward to doing this at the age of 82, soon to be 83.
How exciting, especially being a cat lover and never without one.