By The Contemporary Jewish Museum - July 16, 2015
In the eighteenth century, the concept of the sublime became very influential among painters and poets due to an increasing interest in the aesthetics of science. Expanding global exploration made people astutely aware of the enormous scale and splendor of the still-being-surveyed earthly wilderness, and the staggering immensity of the universe was being revealed by astronomy. The result was a combination of awe and fear—awe at the majesty and beauty of creation, linked with the fear of human frailty, mortality, and insignificance in the light of the vastness of the cosmos. Furthermore, this response itself became a point of interest: how do we existentially resolve our psychology and spirituality with this new information?

There are corresponding considerations of these concerns in Judaism, for example in the concept of yir’ah, or the fear of God as something bigger than oneself, and observance of the Ten Days of Penitence (between Rosh Hashanah and Yom Kippur) in which time between creation and death is metaphorically compressed into a ten-day period. 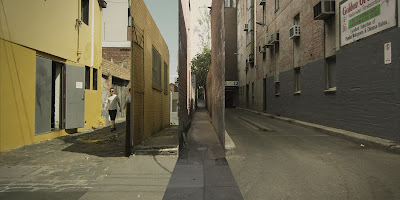 Night Begins the Day is an exhibition that reexamines not only time, but also the related notions of space and beauty. The title is taken from the biblical concept that the day begins at sunset, in darkness, instead of the more common definition of beginning at dawn. Throughout most of human history our experience of time has changed very little: duration has been measured in days, weeks, and months. Now, we can launch satellites that will literally travel forever, or send messages to the other side of the planet in an instant. Artworks in this exhibition consider this new compression and expansion of time as understood as a human construction. Simultaneously, our minds must grapple with the knowledge that the space of the universe is expanding infinitely and is ultimately incomprehensible and unknowable, while at the same time we explore quantum mechanics, the world of subatomic particles that make up the physical world. Some of the work in the exhibition examines how we wrestle with vastly different and mutable scales of spacial reality. In Night Begins the Day, beauty is approached as a medium or tool through which to contemplate ideas, such as space and time. Beauty becomes most apt and powerful when used to approach topics of unknowing, or illusion, or feelings of the Sublime.

Total Perspective Vortex (2005) by computer scientist Robert Kooima epitomizes the wonder of the technological. In this interactive video piece, visitors use a joystick to travel through a scientifically accurate depiction of seven light year’s distance from our sun. A sense of the vastness and emptiness of enormous but essentially small amounts of space is made manifest in the participant’s mind. New understandings of time are represented in such work as Alicja Kwade’s installation of eight pocket watches hung in a constellation in which the uncoordinated and amplified ticking of the clocks points out the arbitrary and man-made nature of conventional time. A contemporary take on the traditional sublime is offered by photo-documentation of the Darvaza crater, a gigantic fire pit left behind by oil explorers in the 1960s that has been burning for half a century in the former Soviet Union, a sight both awe-inspiring and terrible, an example of unanticipated consequences of human actions.

Exhibiting approximately 25 artists, scientists, and creative thinkers—including Peter Alexander, Lisa K. Blatt, Peter Dreher, Moira Dryer, Institute for Figuring, Masood Kamandy, Robert Kooima, Michael Light, Josiah McElheny, and Fred Tomaselli, among others—Night Begins The Day allows that even though our knowledge continues to change and grow, there are still moments when it is all just too much to comprehend. Instead of offering answers, the exhibition presents alternative ways of modeling one’s existence in a world of ever-shifting utter beauty and measureless time.

The exhibition is accompanied by a full illustrated catalog including essays by Chief Curator Renny Pritikin and Associate Curator Lily Siegel, and new writing by essayist Dodie Bellamy and Nathaniel Deutsch, director of the Institute for Humanities Research and co-director of the Center for Jewish Studies at UC Santa Cruz. Available online and in The CJM store.
art beauty contemporary art curator ideas museum night nightbeginstheday rennypritikin space sublime time