Recently, I went on a walking tour of San Francisco’s North Beach neighborhood with some Museum colleagues to visit historical sites related to the Beat Generation. It was a fun way to prepare for the Museum’s exhibition Beat Memories: The Photographs of Allen Ginsberg is currently on view at the Contemporary Jewish Museum (CJM) through September 8. 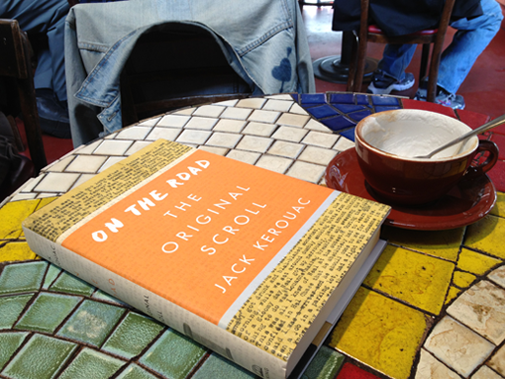 Arriving in North Beach, I stopped in at Caffe Trieste—Allen Ginsberg’s home away from home—for a cappuccino and to reread a few pages from of Jack Kerouac’s On the Road, the 1957 novel that began the Beat movement. While I’d read it many times before, I’d never read the Original Scroll version. Recently released, it’s Kerouac’s original manuscript for On the Road typed on a single scroll that he taped together from multiple pieces of paper that he cut to fit the typewriter. His editor, however, saw it as a source of libel and unorganized work that was impossible to read. So the scroll was edited, paragraphs inserted, and names were changed. It was released six years ago, the way Kerouac wrote it, in three weeks, fueled by coffee. 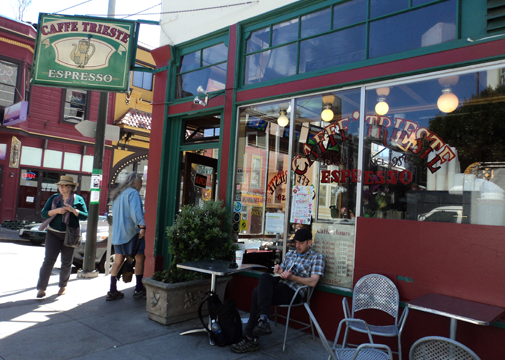 Caffe Trieste opened in 1956. Ginsberg made this his home away from home. I had a lovely cappuccino and a tasty bagel. There was a strong sense of community, and while new, I felt welcome. I witnessed the employees and patrons acknowledge one another by name. It reiterated the Beat history, creating a coterie of familiarity by accepting the unknown.

After a half hour with Kerouac, it was time to meet the tour group at the Beat Museum. Located at 540 Broadway, the Museum offers an expansive and anecdotally engaging history of the Beat generation. More importantly, it contextualizes the Beats’ influence on literary and present-day culture. It is home to the most comprehensive collection of Beat memorabilia including Ginsberg’s typewriter, Kerouac’s plaid wool shirt, and a myriad of vintage copies of Beat literature.

The Museum, housed in a building over a hundred years old—with worn carpet and squeaky floors, includes a small theater with snacks and beverages available for purchase on the honor system. While most of their displays are permanent, the Museum does have a small gallery space with rotating exhibitions featuring contemporary artists. And of course, there is a store, offering both contemporary and vintage books, along with great pulp literature paraphernalia, like beer cozies featuring quotes by Hunter S. Thompson and Charles Bukowski. But best of all is Jerry Cimino, the museum’s Founder and Director—a tireless and passionate advocate for all things Beat.

Jerry took us to the exact address that is considered the birthplace of Beat life in San Francisco, 554 Broadway. In 1954, Ginsberg was dropped off on the corner of Broadway and Columbus because Carolyn Cassady found Ginsberg in bed with her husband, Neal Cassady. She drove Ginsberg from San Jose to San Francisco. Ginsberg asked, "Where should I go? I don't have any money," and she gave him $20. He stayed at the Marconi Hotel, which is still operating today. 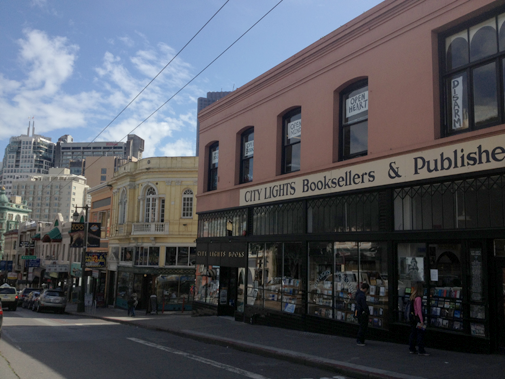 City Lights Bookstore is the epicenter of Beat History. Founded by poet Lawrence Ferlinghetti and Peter D. Martin in 1953, they published Ginsberg’s Howl and went to trial for selling subversive and pornographic books. The state of California charged Ferlinghetti with printing, publishing, and selling obscene and indecent works: Howl.  At the end of a five month trial, the judge, Clayton Horn:

"ruled that a work could not be considered obscene if it had ‘the slightest redeeming social significance.’ This legal precedent was used in later years to publish classics like D.H. Lawrence’s Lady Chatterly’s Lover, Henry Miller’s Tropic of Capricorn, William Burrough’s Naked Lunch, and other works of previously banned articulations of the life force in action. The immediate effect of the trial and the accompanying publicity made Ginsberg’s epic poem an underground bestseller and launched a revolution of new ‘wide-open’ American literature." (Morgan, p 9)

This bookstore is rich with history and the steps are worn down by poets, students, activists, readers of great literature, and tourists.


Ginsberg lived above the Cosmo Club, then called Beach Hotel and Ann’s 440 Club. Here he wrote countless letters to parole officers to get Neal Cassady, out of San Quentin, where he was “serving five-to-life for possession and sale of two joints” (Morgan, 28). Hoping to inspire sympathy, he told the officers that Neal had a wife and child that depended on him. Hearing this only reiterates the support that the Beats had for one another in art and life.

Ginsberg wrote Howl while he was living at 1010 Montgomery Street.

Shigeyoshi "Shig" Murao, an employee of City Lights, was arrested and went to trial for selling Howl. (Ferlinghetti went to trial for publishing Howl). Murao lived in the apartment building at 1367 Grant. Ginsberg would stay with Shig when he was visiting the Bay Area. The neighbors always knew when Ginsberg was visiting because he would hang his freshly laundered socks and underwear out the window to dry.

Originally a Jewish deli, the Co-Existence Bagel Shop at 1398 Grant Street used to be frequented by Beats. Kerouac mentions it in Desolation Angels. Today it is an empty space. In 1967, needing more space, City Lights moved their publishing operations a few blocks away to 1562 Grant Street. In the late 1970s they acquired the space next door to the bookshop. A bronze plaque memorializes the old publishing space as Poets' Corner.

Jerry wanted to show us the plaque commemorating such a huge part of San Francisco's literary history. He had to move someone's trash bags to show us. If it weren’t for people like Jerry Cimino and Bill Morgan, and institutions like The Beat Museum and City Lights Books, this history would forever be lost under someone’s garbage.

I highly recommend booking a walking tour through the Beat Museum. It is one of the most interesting tours I have ever been on. It's a great way to see the city, especially if you are interested in Beat history and literature. There is so much more to the tours than these little photos and tidbits. They include the Beats' escapades, dirty laundry (I only told you about Ginsberg's clean laundry), and more locations. 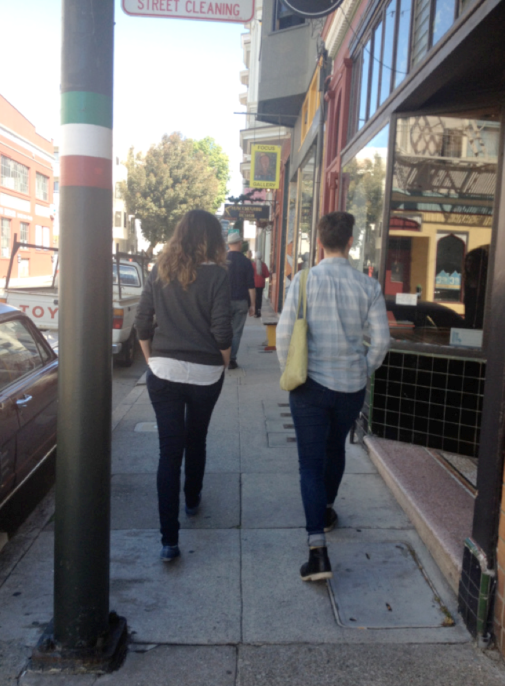 All photos by Melanie Samay.

Melanie Samay studied literature at Fordham University in New York and received her Masters in English literature from San Francisco State University. Currently she works in marketing for the Contemporary Jewish Museum. She spends her time reading, walking around the city, sitting in the park with friends, and hanging around dark spaces at night listening to loud music. Read more from Melanie on her blog about books and book-nerdom: http://soifollowjulian.com
allen ginsberg beat memories melanie samay North Beach Tour