"Read by Famous," Donated by Another


LISTEN: Hear how the trio approached donating to Read by Famous, and coming full circle in this talk.

Connect the dots from Michelle Tea's Valencia to Eileen Myles' Chelsea Girls to Gilles Deleuze's Masochism: Coldness and Cruelty & Venus in Furs, and you'll find artist Josh Greene. Greene's project Read by Famous seeks donated books—"the actual books that these people owned and read"—from famous or well-established individuals such as Gavin Newsom and Philip Seymour Hoffman. A selection of books from Read by Famous is currently on view at The CJM in Greene's exhibition Bound to Be Held: A Book Show.

A particular trio of book donors in the collection—award-winning writers Michelle Tea (Valencia, Mermaid in Chelsea Creek), Eileen Myles (Chelsea Girls, Cool for You), and Emmy-nominated Jill Soloway (Six-Feet Under, Transparent)—gave one another's books to the project, and in the process, recommended one another for it. Jill contributed Michelle's book, Michelle gave Eileen's book, and Eileen donated a book an author that is no longer living, thereby completing the chain.

In a talk on Thursday, May 7, the three writers came full circle to discuss literature, feminism, making it in Hollywood, and more. In this segment, the speakers converse about the difficulty of letting go of a well-loved book, on books as art, and how their selections show their influence on one another's writing. 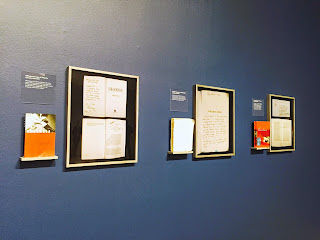 Installation view of Bound to Be Held: A Book Show
with the Read by Famous submissions by Jill Soloway, Michelle
Tea, and Eileen Myles.

READ: Below is the transcript of the recording.

Matt Sussman (MS): I wanted to start just by asking you about your selections for Read by Famous, just because I think it's both serendipitous that you wound up selecting each other in a way. But also, I think the selection points the ways in which you've influenced each other's work and gotten to know each other as well.

Michelle Tea (MT): So I was asked to donate a book that I'd read that meant something to me and write a little inscription in it. And, it's really hard to let go of books, like I find it really really hard, so I was trying to cheat a little bit, maybe donate a book I didn't love that much or something I was going to sell or something I had doubles of, you know. And I saw Eileen Myles'—the copy of her book Chelsea Girls, and it's easily the book that has influenced me more than any book in the world. And, it felt like this dare, like do I go all in this or do I not? Am I just fucking wimp out and send like, I don't know. So, I did sort of cheat a little bit because I donated my copy but I have Ali Liebegott's copy at my house. And I don't think she realizes that... So I felt like I can always keep Ali's copy because I bought it for her a long time ago. So I feel like I could pretend like it's mine. So I did cheat a little bit. It just felt like it would be a beautiful thing to give, because it looks like it's my favorite book. I mean there's no cover, it's like all beat up, it's dog eared, there's coffee spilled on it, I've read it and reread it a trillion times. So I just decided to go all the way.

Eileen Myles (EM): Didn't you feel like—I felt like being asked to give away a book that I love, that I had written all over, was like so painful in a certain way. And I felt like, I always think of painters and what's so weird, even though they get all this money when they sell their art, they always have to let go of their work. And I've talked to painters about it and they say it's really hard...like, you've lived in the studio with it for so long and you've put so much of yourself in it and then it leaves and it's gone—though in exchange you get all this dough, you know. And I felt like there was something like that about giving up a book that I really... like I gave up—my book was Masochism by Deleuze. And I'm not like a big theory head but every year, every few years, I find a theory book that is so exciting and brings up thing's I've thought about but never in that way—and it just like got me so going and influenced the next book and everything. And Masochism was like that—it's like exactly like what you were saying about something you really care about, can you give it away? Like that's sort of Masochism, in a way. But, it's also like a plot line...it's like if you give up something really valuable, then what happens? You know, it creates this hole, and then something else happens. And part of what I learned from this book was to make stories out of things, like shit that happens basically, like the stuff that comes along, like what do you do with this. And I'm the kind of writer, and I don't want to say—I think we're the kind of writers that do that. You know, it's like following the breadcrumbs and making that into the art. And I felt like that was the masochistic road, and I'm very excited about it. So I just covered that book.

So the way I cheated was that I got my assistant to copy every fucking note. I thought, "This is double fetish! I'm giving it up and then I'm keeping it!" And it's in this other handwriting and stuff, and it was just so funny, like I paid her to painstakingly like write every little underline.

MT: She did a reproduction. (Laughs).

EM: Yeah! And then I thought it was another piece of art.

MS: So wait, the version in the show, is that the facsimile?

EM: No, I was honest, I gave the real thing. Yeah.

JS: Yeah, I felt similarly kind of angry about the request.

JS: Well now I feel like I get why I did it, because we're here. Like this has been a great week and trip. I got to meet Eileen, I already knew you. So like, it all adds up to something good, but at the time I was upset. And I have a bunch of Valencias actually.

MT: Oh good, I was going to give you one.

JS: I have so many of them, I probably bought twenty over the course of my life.

JS: Well because I was working on that film, on the chapter in the film, so everybody who worked on it, I wanted them to read it—and I always give it as a gift. And yeah, it's one of those books that...you know, both of you guys really inspired me to just sort of be—to have a voice. And that the sort of just like bold brash grabbing on to the protagonism and just kind of like throwing shit all over the place with your voice and not giving a fuck. That was what Valencia did to me when I read it. I feel like sometimes you write books imagining certain people are going to read them—or like trying to be like Michelle Tea. That's kind of how I found my writer's voice, by trying to be like you. So that's why the book mattered.