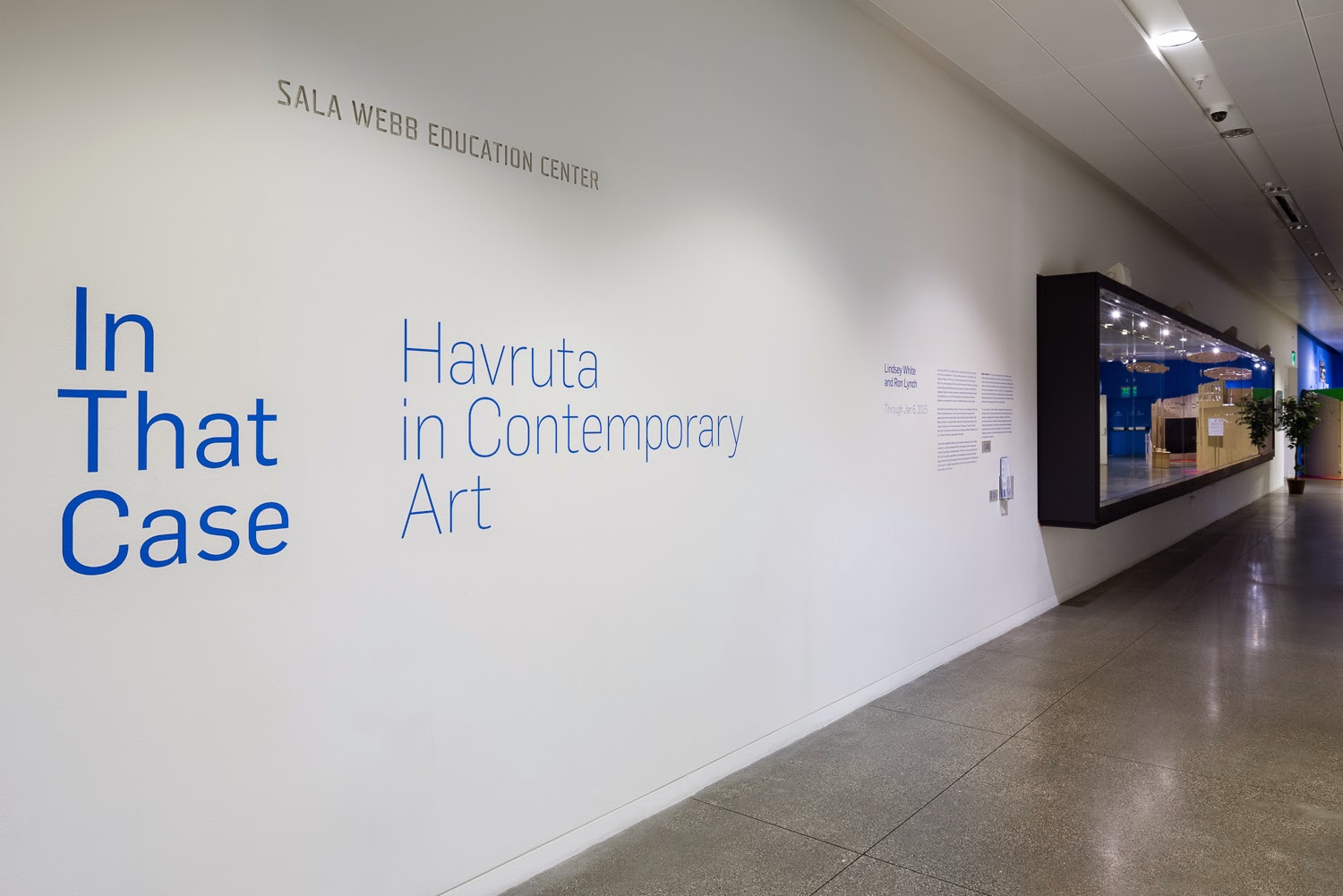 Installation view of In That Case: Havruta in Contemporary Art:
Lindsey White and Ron Lynch. Photo by Johnna Arnold.

Creativity comes in pairs in The CJM’s exhibition series In That Case: Havruta in Contemporary Art. Following exhibitions with Lindsey White and Ron Lynch, and Helena Keefe and Jessica Prentice, Anthony Discenza and Peter Straub are the third duo to showcase their collaboration. Each duo had, and will have, different roles in the creative process; for instance, photographer Lindsey White took pictures of the subject—Ron Lynch—while Lynch employed his comedic skills, creating an audio ‘tour’ of the exhibition that was available to visitors.


Researching for the exhibition series, I read Sarah Lewis’ NYT review on Joshua Wolf Shenk’s Powers of Two: Finding the Essence of Innovation in Creative Pairs. I thought about the implications of a collaborative practice—not only on the pair’s creativity, but also on their individual practices. As much as a partnership allows for growth, it also requires some negotiations, and sometimes, a redefinition of power ratios. This is precisely what Lewis concludes in her review: “Just when we think an innovation came from an individual, we see that it was, in fact, created for and with someone else—the other half of an often hidden pair.” This called me to reflect on one artists’ pair, painters Sonia and Robert Delaunay, whose collaboration flourished in the early twentieth century—but at a cost to one. 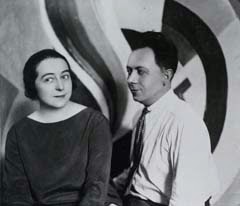 
French Jewish artist Sonia Delaunay-Terk is best known for her colorful abstract paintings and textiles, though her work encompassed many genres and mediums. While her husband’s work, French painter Robert Delaunay, has been extensively shown and written about during his lifetime and after his death in 1941, Sonia has remained for many decades an ignored figure in art history.[1] The couple married in 1910 and  Sonia Terk adopted her husband’s last name. Together they participated in the Orphism movement derived from Cubism and Fauvism: creating abstract paintings for the sake of aesthetic pleasure rather than representation or symbols.

Both Sonia and Robert started their art practice with painting, but while Robert still painted figurative works—such as his series of Eiffel Tower—, Sonia experimented with abstraction early on. She had no hesitation to bring her art closer to life, most notably through applied arts and design. Throughout the 1910s and the interwar period, the Delaunays created multiple paintings, works on paper, murals—and entire rooms—with the vivid colors of abstraction. It is fascinating to see the influence and inspiration that went both ways: Sonia’s geometric shapes influencing Robert’s paintings (Homage to Bleriot, 1913), and Robert’s figurative style on her own paintings (Flamenco Singers, 1916), and perhaps inspiring Sonia to design clothes—dressing figures in abstraction. Even, Ballets Russes’ founder Serge Diaghilev asked her to design the costumes for his production of Cléôpatre in 1918. The title-role costume, today in LACMA’s collection, is like Sonia’s most eye-catching paintings: a bright multi-colored (with a dominant yellow) simple dress made of silk and wool, with lines of gold and rainbows, sequins and mirrors. The costume’s patterns are abstract, yet it gives the character of Cleopatra her majesty and mother-goddess warmth. 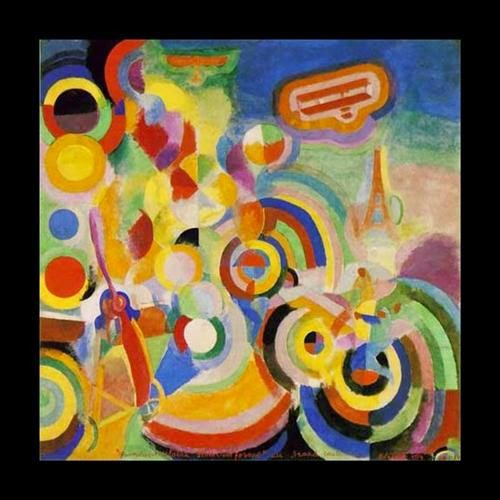 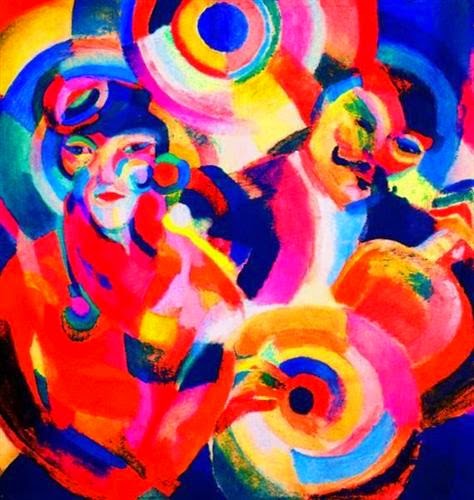 In a 1978 interview with BOMB magazine, Sonia, then 90 years old, spoke about her creative relationship with Robert in these terms: “No [there was no rivalry between us]. Not from the point of view of painting. We asked each other for advice;” but also sharing that: “He talked, but I realized.” Her very honest words conjure a period where women’s rights were very limited; Sonia actually said in the same interview “I despise the word [feminism]!”

Despite the generational gap, I would hope that Sonia herself had not qualified her practice as a “realization” of what her husband “talked” about. Even if they did both contribute to each other’s process, they were two distinct minds that came together in life and in art. Recent exhibitions have explored Sonia’s oeuvre as one of the greatest contributions to modern art as well as to the applied and decorative arts. I am hoping to see more work done on the pair’s collaborative practice, and its implications. Comparison can only do well to Sonia—who definitely seems to be “the other half”: the hidden and probably the greatest mind.


[1] Though recently, her work has been the focus of several exhibitions such as Color Moves: Art & Fashion by Sonia Delaunay (2011) at the Cooper-Hewitt, Smithsonian Design Museum, New York and Sonia Delaunay: Les couleurs de l’abstraction [The Colors of Abstraction] (2014) at Musée d’Art Moderne, Paris, and which opens this month at Tate Modern, London. 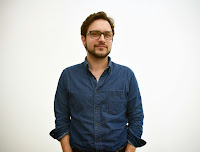 Pierre-François Galpin is Assistant Curator at The CJM, currently working on upcoming In That Case: Havruta in Contemporary Art exhibitions. Prior, he worked at the Centre Pompidou (Paris) and Independent Curators International (New York), among other institutions. His writing has been published on different media, including The Exhibitionist, Art Practical, and exhibitions catalogues.