Image: A short reflection I wrote upon this project.


My name is Hope Kogod and I’m one of thirteen Teen Art Connect (TAC) interns at The Contemporary Jewish Museum (The CJM). As a part of the TAC program, we apprentice during the school year with Museum staff, help at CJM events, and get to be part of interesting art projects such as Our Roots.

Our Roots is a film project hosted by The CJM and the Galicia Jewish Museum, Kraków inviting high school students to learn more about their family history and express it through short videos. The videos are available for viewing on The CJM and the Galicia Jewish Museum’s websites. A selection of submitted projects are also presented at The CJM in conjunction with the exhibitions Letters to Afar and Poland and Palestine: Two Lands and Two Skies that are on view through May 24, 2015. Our Roots relates to these exhibitions in that both feature family photographs and footage.

For the Our Roots project, the TACs split into four groups. We began by thinking about what our roots are and the different ways we could interpret them through film. My group  decided to focus on physical objects and family heirlooms. Before we began filming, we had trainings with guest artists and educators to give us contexts and skills. Our first guest speaker was Lily Siegel, from the Curatorial Department, telling us about the two exhibitions. Following this presentation, Roseli Ilano, from Immigrant Nation came and helped us make short representations, using images and text, of our family’s immigration story. They can be found on the Immigrant Nation website, with many other immigration stories from around the world. We then heard the inspiring story of a Holocaust survivor, Leon. He told us of his bravery and life as a young child during the war and Holocaust. It was a wonderful opportunity to hear from one of the few living survivors. Lastly, two filmmakers came in and taught us about filmmaking strategies. We learned about lighting, cinematography, and interview techniques. They also helped us visualize the theme of our history that we wanted to discuss.

We were instructed to experiment with filming something relating to our theme. I filmed my parents talking about different objects they had passed down from their families, but the video seemed flat to me because my parents weren't emotionally attached to any of the objects. I began to contemplate what objects my parents were more attached to. I realized that there are properties that they are physically connected to: their body parts. The obvious choice was their noses; both my parents have pronounced noses that contain cultural significance. 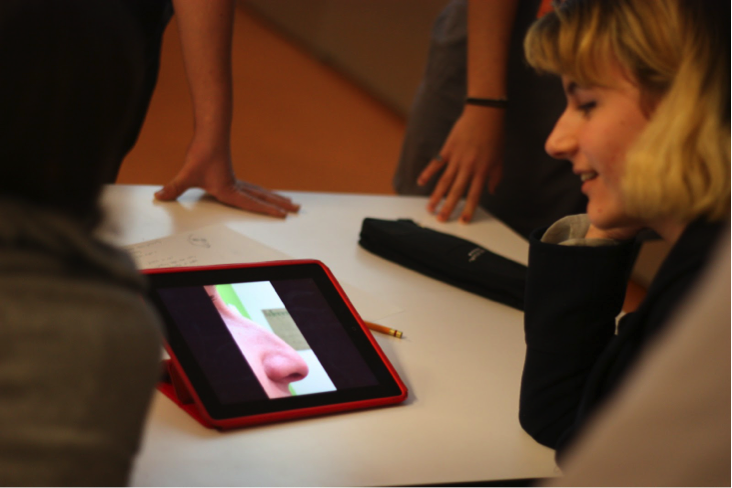 Image: Showing my film to the rest of my group.

I decided to film my mother talking about her nose because it had more personal importance than any object my family owns. My mother has a prominent nose that was given to her by her Italian father. She was bullied about her it when she was young, but eventually learned to love it by realizing it was unique and valued in other cultures.

When I shared my film with my group, they realized that their family members also had body parts that had notable histories. Our bodies are frequently very obvious representations of our culture and history so we decided to shift our film’s direction. One group member, Sophie, filmed her grandmother talking about her curly hair and why she chooses to straighten it. Another, Molly, filmed her dad talking about his baldness and where this comes from.

We edited our videos on iMovie, adding images to help illustrate the body part’s history within each person’s life. Though iMovie is a simple software program, there are more editing tools than we expected and we utilized this to create the best videos we could. 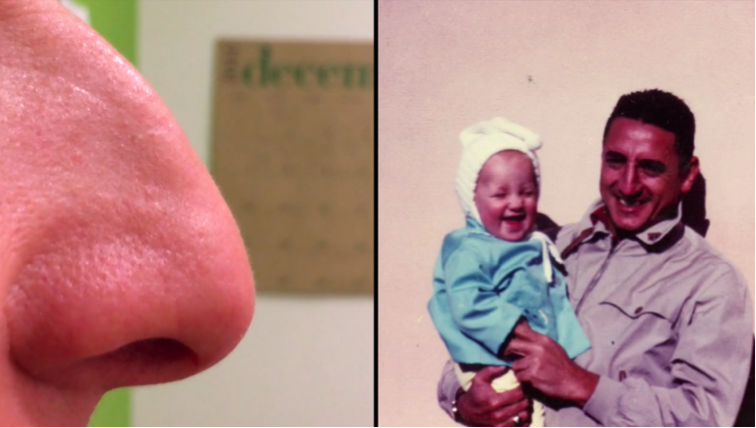 Image: A still from our film- my mother’s nose
next to a photo of her as a baby with her dad.

From the Our Roots project, I learned about the history of our bodies and about the different types of relationships people have with their bodies/body parts. Some people ignore them, some change them, and some appreciate them. I learned how my mother’s relationship with her Italian nose and the history of it could empower and inspire others. After Sophie watched my segment of the video, she commented on how it made her feel more positive about her nose. I was glad that my mother’s story could enable others to feel better about their bodies. From this, I became more grateful for my mother and appreciated her more. In addition, I began to value my own body for the history it carries.

Our Roots is on view outside the Stephen and Maribelle Yud Gallery, February 26 through May 24, 2015. View online →

All images courtesy of Hope Kogod.

Hope Kogod is a Teen Art Connect (TAC) intern at the CJM. She is currently apprenticing in digital engagement at the museum. She is a sophomore in high school and enjoys art, fashion, and acting.
contemporary jewish museum Galicia Jewish Museum Our Roots story Teen Art Connections teens video