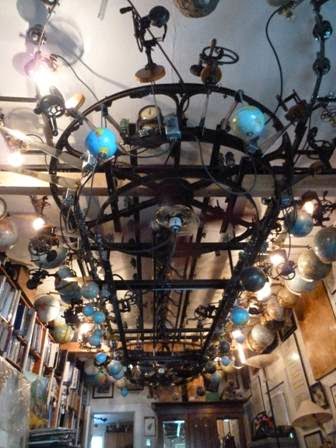 In summer 2014, one of CJM Chief Curator Renny Pritikin’s first assignments was to liven up The Museum’s lobby. He invited Sacramento-based artist, Dave Lane, to create an installation. The CJM’s first major commissioned art work, Lamp of the Covenant is ninety feet long and weighs 12,000 pounds. Here, Pritikin talks with Daryl Carr, Director of Marketing, about why he chose the artist and why the work is a good fit for The Museum.

Daryl Carr (DC): How did you meet David Lane?

Renny Pritikin (RP): I was hired in 2004 to be the director of the Nelson Gallery at UC Davis. I didn't know anyone in the area except an old colleague, Chris Daubert who teaches at Sacramento City College and runs the Kondos Gallery there. He's a great guy—one of these people who knows everyone. Chris said, "If there's one person in town you have to meet, it's Dave Lane. I have a show of his up now.” And so I made a trip to Sacramento to see his exhibition. It was in this very small gallery, much smaller than our Swig Gallery.


I'm somebody who looks at art 24/7, 365 days, so I've seen a lot. And Dave’s work just knocked me against the wall. It was so staggeringly beautiful and original. And to see this in a modest gallery in a junior college in the Sacramento Valley, it just underlined for me how there is great art happening in unpredictable places. I thanked Chris immensely and I immediately met Dave. He wasn't and still isn't someone who's obsessed with his career. He didn't start showing his art until he was in his 50s. And even then it was mostly at the California State Fair. So he's not somebody who wanted to become rich and famous. He is a true artist who would be doing it if he was the last survivor on earth. He'd still be in his backyard making things.

It took me more than two years, maybe three or four, to get him to show his work at UC Davis’ Nelson Gallery in 2008. It was his first museum show.

DC: You’ve described Dave as an outsider artist. Can you explain what that means?

RP: You know, the term outsider artist is kind of politically incorrect at this point in time because there's something condescending or elitist about it. In the old days, an outsider artist was someone who was a criminal or was insane. But today it's more helpful to think about it in terms of someone who didn't go to art school, who taught themselves how to make art.

That's true of Dave. He has a degree in cartography but he is a self-taught: both as an artist and in art history. If you go to his house, his walls are covered with books about art and artists—he's in no way naive. He's very sophisticated. He came to the attention of people like me, curators, and other artists, not through school or hanging out, but by showing. He has high standards and a certain ambition.

He's uncompromising and doesn’t care about the things that a lot of artists who come up through the traditional system care about—making the right connections and that kind of stuff. So in those ways he's an outsider. He's also a true American eccentric. So he has some of the elements of the outsider artist, but he's a special character.


DC: How would you describe his work?

RP: His work is sculpture in the tradition of found sculpture that has been a part of the arts for at least a hundred years starting with Duchamp and others. People find industrially made materials and combine them in surprising and unusual ways, or transform them into art.

Dave works with large, heavy, steel agricultural and other industrial machines that he gathers in his backyard. He's a welder and can torch things. He cuts them up and combines time, so it's found art, it's assemblage, and it's sculptural. It’s large scale that has a symbolic meaning to him that is not, like most good artists, obvious to the viewer. But you sense that there's some serious mind at work, but it's not a simple one-to-one meaning. You have to talk with him and hear what he has to say to really understand the depth of his thinking.

DC: The Contemporary Jewish Museum is a non-collecting institution. Why this commission?

RP: One of the first things that Lori Starr, The CJM’s Executive Director asked me to do when I was hired as chief curator at The Museum was to liven up the Grand Lobby. It's a difficult space for art because it's very vertical, busy, and crowded. It's visually complex, so to bring art into the lobby is a complicated task. Because the walls are at an angle and have tile and other materials on them, the simplest solution is to hang things from the ceiling. I approached several artists whom I respect and would be excited to feature. Dave was the first one to respond enthusiastically.

I'm very excited to see what he'll do on a large scale. This is by far the biggest project he's ever taken on. I think that the moment visitors come in the front door they’ll be excited about what they find inside The Museum.

DC: Why is Dave's work a good fit for The CJM?

RP: Dave was raised in the Christian tradition but he respects all spiritual investigations. He respects and is interested in Judaism. So that's one reason he's a good fit for The Museum. Lamp of the Covenant refers to the lamp in the synagogue that always hangs over the altar. And it's a light that represents the divine presence in the room. And the covenant, of course, is the relationship between Judaism and God. And so for Dave to pay respects to that history of Jewish people is very touching and moving. And to help us articulate the notion of contemporary art as experienced through the lens of Jewish experience, it's a very profound cross-cultural, cross-religious partnership that is very much where we see The CJM is going.