A Herpetologist Takes On Frog and Toad

By The Contemporary Jewish Museum - March 17, 2014
Our current exhibition, Frog and Toad and the World of Arnold Lobel inspired us to visit The California Academy of Sciences to observe real-life frogs and toads. We were fortunate to sit down and chat with David Blackburn, Assistant Curator of Herpetology, about the differences between the two, the anatomical accuracy of Lobel’s art, and address some recent rumors about Cal Academy's most famous resident, Claude the white alligator. 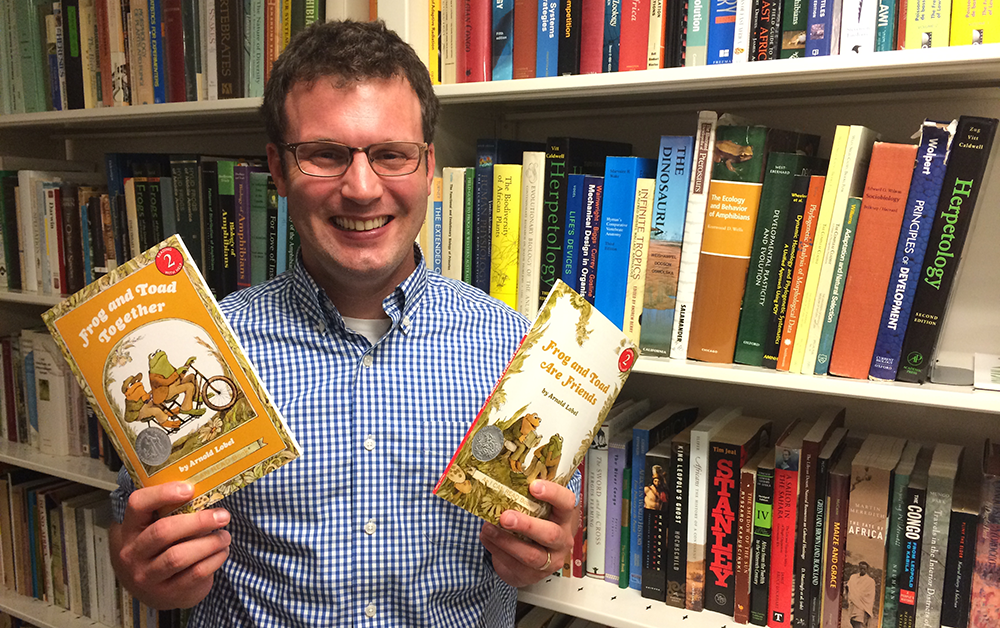 Have you read the Frog and Toad books?

What are the differences between frogs and toads?

Technically true toads are just one family of all frogs. Toads are a type of frog but not really vice versa. The archetype of a toad is a grumpy warty thing that is on the ground but there are toads that breed only in tree holes. There are more than 6,200 frogs including toads, so for reference that's more frogs than [there are kinds of] mammals. There are probably slightly less than 500 in the species of true toads so you have some sort of sense of that relationship between frogs and toads. This is a time of discovery, so as a community of scientists we discover 150–200 new species of amphibians every year, most of which are frogs. Right now we are above 7,200 species of amphibians. Most amphibians are frogs. There are about 600 plus species of salamanders and 199 species of caecilians. [Caecilians] look like a cross between a snake and an earthworm. Those are the three types of amphibians.

As a herpetologist, can you give us your expert opinion on the anatomical accuracy of Arnold Lobel’s art in the Frog and Toad books?

Sometimes it's hard to tell the difference between Frog and Toad but one is brown and one is green. One thing that’s good about Frog and Toad as art is that normally you can only count four fingers on Frog and Toad. I read a lot of children’s books and there are far too many five fingered frogs. There are no frogs with five fingers. There he is with a hat but he still only has four fingers.   You see the round dot on his head, [Lobel] actually draws this round circle on their heads very clearly, and that’s their ear; it’s the tympanum. On Toad, there's a bump called the parotoid gland and if you poke and bother a toad it will immediately secrete a little white stuff (that is part of their chemical defense). Lobel actually got some frog and toad details right. They are probably more accurate than the attempts at frogs and toads you see in a lot of children’s books. The four finger thing really bothers me because it seems such an easy thing to have right.

Arnold Lobel was bullied as a child, which contributed to his interest in writing such sensitive books for children. Are there any frog species that are bullies?

Cane toads are an invasive species in a lot of parts of the world. They are big toads originally from the Caribbean and are toxic. There are a lot of cases of native wildlife eating cane toads and not surviving or of them eating other small native animals. They are big toads; for the most part frogs and toads eat whatever fits in their mouths. So in Australia they are a huge ecological problem. There is not necessarily anything keeping them in check. So they are moving like a wavefront, from east to west across Australia. They could be counted as a bully.

In Hawaii there is a species that is viewed as a pest simply because it sings. The Puerto Rican tree frog, which is a point of pride in Puerto Rico, the coquí—were introduced at some point and as far as I know not with a purpose and they sing. They are viewed as a pest species simply because they make noise. People would prefer a quiet night in Hawaii than a frog night in Hawaii.

In California we have two species that are problematic and invasive. One is the American bullfrog which is normally from the Southeast and the other is the African clawed frog. Both of those species can potentially spread disease—they will carry it and not die. If they get moved to a new habitat they can certainly bring the disease or fungus with him. And they also can just be a problem to competitively exclude species of native frogs. They could potentially eat other frogs.


Do any species of frogs and toads tend to be friends?

There’s certainly species that can occur in close contact with each other. Sometimes you see this with tadpoles for instance. I’ve been places in Cameroon and taken a net in a stream and wiggled it around and come up with five different tadpoles all doing different things. A lot of times we biologists talk about things competing against each other instead of being friends.

The California Academy of Sciences has a white alligator named Claude. There are some rumors about him and his ex female companion...

All these rumors about Claude, he’s still here, the white alligator. A female was brought in that didn’t get along with Claude. She was moved to another place. Claude is very sensitive. We’ve had some incidents with him. Everyone has to be very patient with him. It’s a funny lot in there. They live together, I would not say they are necessarily friends but they tolerate each other until Claude decides to bite on one of their legs and not let go. It can last hours. The last time it happened they had to close off the tank from viewing for a while because they were trying to get it to not happen anymore. He is the star and sometimes badly behaved. More like a diva, a diva alligator. He can just behave that way. He’s a star. He is a mascot.


About David Blackburn
David Blackburn did his undergraduate at the University of Chicago, and was almost finished with his anthropology major before he switched to biology. He hung out with a lot of dinosaur scientists and got turned onto frogs because of a talk at UC Berkeley on salmanders. He admits that “it’s as nerdy as it gets to hear someone give a lecture and get hooked.” He did his phD in Biology at Harvard, and spent three years as a post doc at the Natural History Museum in University of Kansas.
You can follow his field research at davidcblackburn.tumblr.com
exhibitions frog and toad

Unknown said…
I feel the love for Frog and Toad! When I taught second grade, we studied frogs and toads to compare and contrast their scientific similarities and differences as well as their literary ones. Such fond memories! Thanks for bringing them back!
March 19, 2014 at 9:07 AM