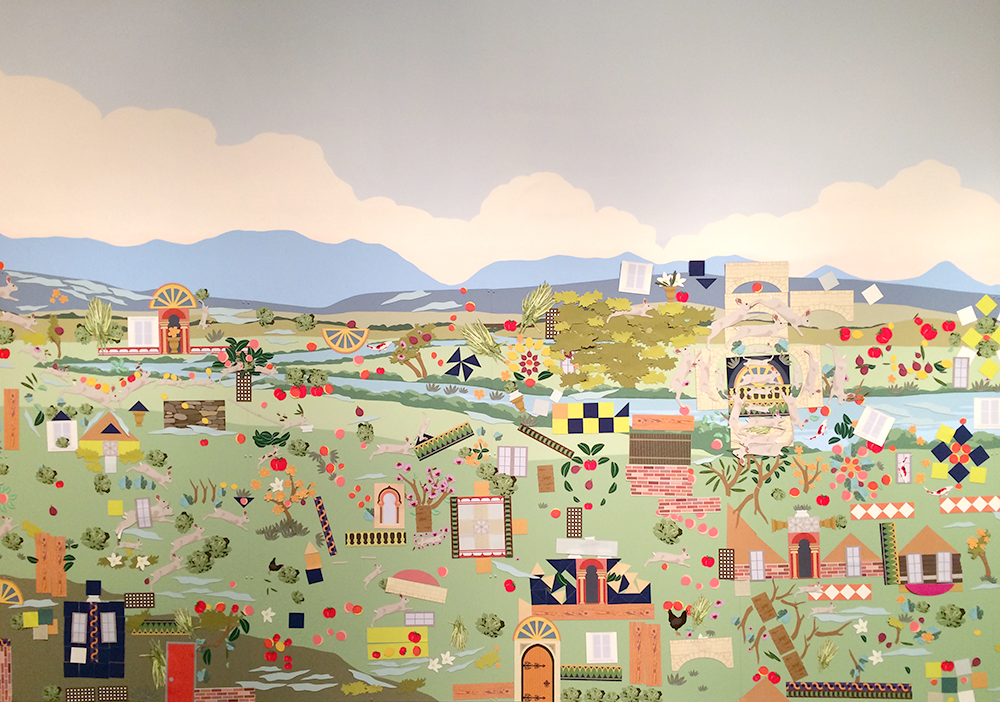 The Encyclopedic Palace, the main exhibition of the 2013 Venice Biennale, borrowed its name from a utopian structure designed by self-taught artist Marino Auriti in the 1950s and intended to house all worldly knowledge. Visions of an idealistic future have inspired artists for centuries, but the utopian impulse has seemed especially timely of late. Returning to the original Greek etymology of the word, “no place,” contemporary artists are less likely to focus on a physical depiction of an ideal world, instead looking to more conceptual approaches to social amelioration.

Marxist philosopher Ernst Bloch wrote that utopia exists in the act of daydreaming, and artists’ renditions of utopia can sometimes mean no more (or no less) than that quietly radical definition. Work in Progress: Considering Utopia, which closes at The Contemporary Jewish Museum (The CJM) on January 20, and Dissident Futures, which closes at Yerba Buena Center for the Arts (YBCA) on February 2, both feature artists who offer their own meditations on utopia and other alternative futures, based on speculation, promise, and possibility.

In the introduction to her book A Paradise Built in Hell: The Extraordinary Communities that Arise in Disaster, Rebecca Solnit argues against the common belief that utopia died with capitalism, instead expressing its evolution into more viable, modest versions. An underlying theme of Work in Progress is the tension between an idealistic utopian potentiality weighed down by reality and a new world order dominated by capitalism. Both Oded Hirsch and Ohad Meromi are influenced by the ethos of the Israeli farm collectives known as kibbutzim, while Elisheva Biernoff’s idealism draws from the progressive movements of the Bay Area.

Oded Hirsch’s video Tochka (2010) in Work in Progress and Revital Cohen and Tuur Van Balen’s 75 Watt (2013) in Dissident Futures both show ordinary people working together toward a common goal. In the videos, the process is far more important than the non-utilitarian product. In Tochka, a group of identically dressed kibbutzniks [members of a kibbutz] work silently together to build an unnecessary bridge. This action suggests a nostalgia for the socialist ideals of cooperation and community. Like Tochka, 75 Watt is dialogue-free, and the factory workers wear matching uniforms. Positioned on an assembly line in an actual factory in China, the workers create a choreographed dance through the production of a non-functional object. In both videos, the artists emphasize the choreographed actions of the characters rather than tangible goals. Scripted movement becomes an agent of utopia, releasing the worker from the monotony of labor. 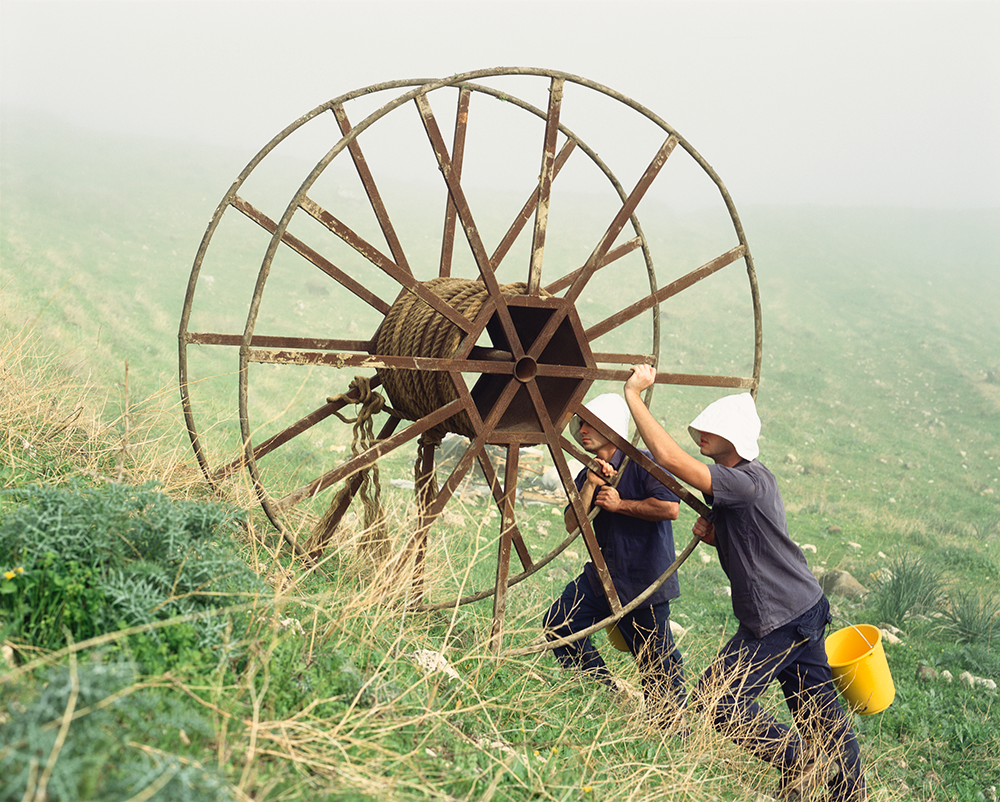 Ohad Meromi’s installation 1967 (2013) in Work in Progress also relates to the potentiality of choreography, and specifically to a “small dance” of a moment frozen in time. One component of 1967 consists of “activations,” wherein museum-goers are invited to don costumes and pose as a living sculpture. This action grapples with history, referencing the moment of silence on Yom HaShoah (Holocaust Remembrance Day) and Yom HaZikaron (Day of Remembrance) in Israel, as well as acknowledging the fraught history of Israel and Palestine during the artist’s lifetime. Perhaps more importantly however, it also looks to the future, inviting museum-goers to contemplate the meaning of utopia and their own role in building a better world. The activations occur on a stage with a backdrop inspired by Russian constructivist set design, a nod to the socialist origins of the kibbutz and an acknowledgment of the utopian spirit of that era.

Brody Condon’s video Future Gestalt (2012), featured in Dissident Futures, documents a performance filmed at LACMA, which also includes a monolithic art historical reference as a backdrop: the looming Tony Smith sculpture Die (1962). Trained actors in brightly colored geometric costumes are instructed to role-play by the artist, who is in turn guided by a psychotherapist. Described as a “1970s group encounter session set in the far future,” Future Gestalt plays with the boundaries of time, offering an absurdist vision of the future entwined with the past. 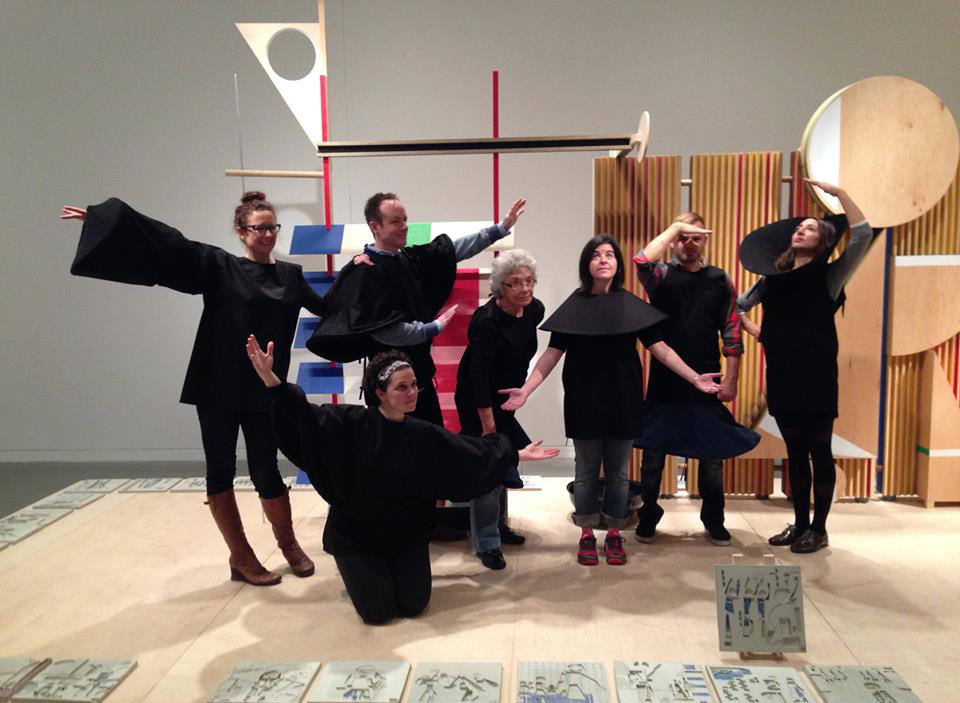 While the previously mentioned works all focus on the human role in shaping utopia, other contemporary artists look more directly at the future ramifications of the environmental crisis. For The Tools Are In Your Hands (2013), Elisheva Biernoff painted a bucolic scene on metal panels that rest flush against the wall of the gallery. Magnets designed by the artist depict flora and fauna, as well as man-made building blocks, which can be placed on the painting to create a unique utopian vista. Threats to the environment are a recurring theme in Biernoff’s work, and this interactive painting suggests that an ideal world would be full of leaping rabbits, flying fish, and blooming flowers.

For Dissident Futures, Future Cities Lab has designed Hydraspan (2013), which imagines a radical reuse of the Bay Bridge with agricultural activity in an area suspended from the bridge infrastructure. Hydraspan offers a model based more on technological possibilities than the more conceptual future envisioned in The Tools Are in Your Hands. Biernoff and Future Cities Lab are part of a larger movement in contemporary art to reflect on and offer solutions to climate change. For example, in 2009 New York based artist Mary Mattingly created Water Pod, a futuristic ecosystem on a barge, which offered a model for autonomous living. 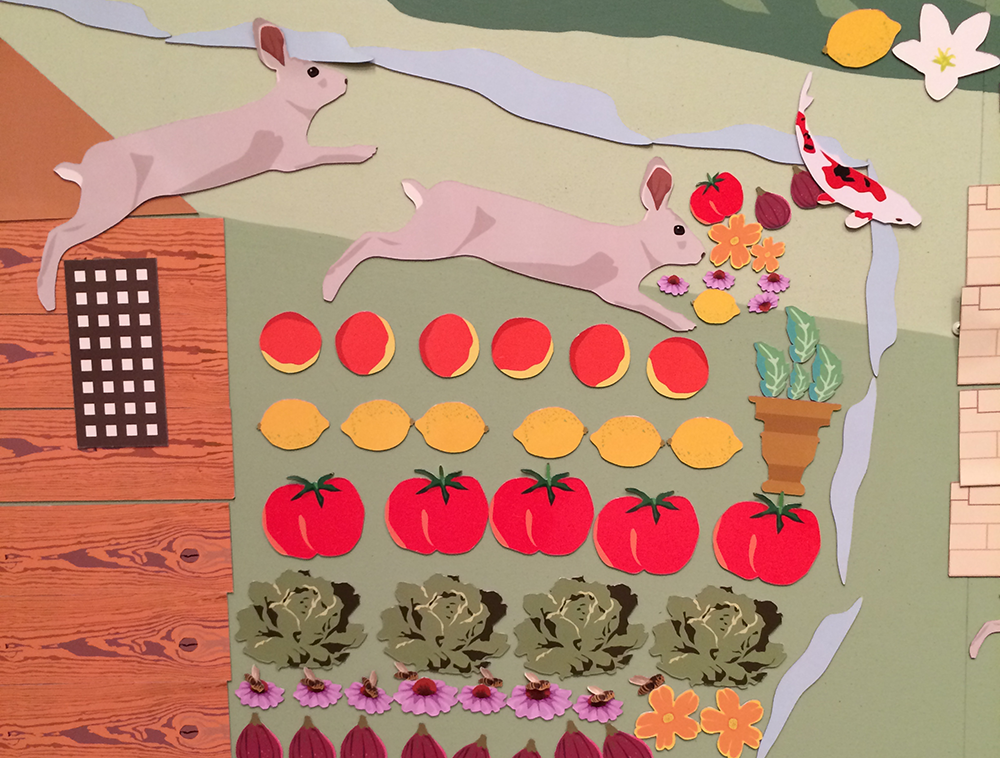 The two exhibitions Work in Progress at The CJM and Dissident Futures at YBCA are physically just across the street from each other, and conceptually they share a common goal of presenting multiple artists’ interpretations of the future. The artists use a range of tools – from choreography to technology– to construct these speculative possibilities, influenced by both political movements and environmental concerns. Both are worth a visit to see the diverse ways artists are thinking about utopia, as well as its dystopian counterpart.

About the Author
Jeanne Gerrity is Curatorial Associate at The CJM. She has worked at The Museum for almost two years, and most recently curated Work in Progress: Considering Utopia. Jeanne is also a writer, who has reviewed exhibitions for Frieze, Art Papers, Art Practical, and Rhizome, among others.
considering utopia exhibitions