By The Contemporary Jewish Museum - October 18, 2013
Brian Scott is the Creative Director of Boon Design, and of our newest exhibitions which deal with the concept of utopia. We asked Brian what inspired this project, and he responded with a self-interview. Presenting Brian Scott interviewing Brian Scott on his process:

What was your approach to creating the identity for the exhibitions Work in Progress: Considering Utopia and To Build & Be Built: Kibbutz History?

I prefer to build from a typographic foundation, which helps to set a tone and tactile presence that we can then expand upon. For The Contemporary Jewish Museum, I first thought about the era during which the first kibbutzim were established, the early 1900s. What was the typography of that era? Was there a modernist typographic equivalent that shared an idealism with these the kibbutz pioneers? I believe that Paul Renner's font Futura (1928) embodies some of these utopian pursuits—Futura strives for geometric balance and harmony in reaction to the chaos that surrounds it. One can almost feel the letterforms straining to shape their destiny. Other typefaces that attempt to employ perfect geometry are Herb Lubalin’s Avant Garde and Lubalin Graph, or Adrian Frutiger’s Avenir. If you read about typography or speak with a type designer, it becomes clear very quickly that achieving a true geometric typeface is elusive, as formal perfection doesn’t necessarily make type legible. I think that same struggle applies to the quest to make something utopian. 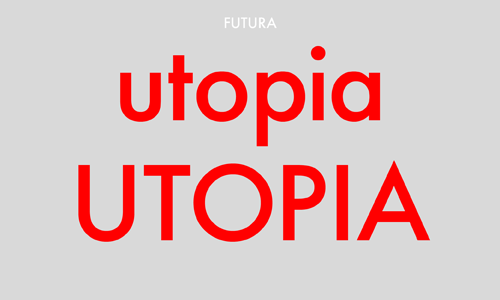 While Futura was our inspiration, I wanted the typography to be rooted in the present, just like the work of the three contemporary artists in Work in Progress. I also prefer to work with living typographers, many of which have worked or still work in graphic design. Since typography surrounds our lives, it’s often a common thread to our daily experiences. Living typographers are responding to the present, while building on the heritage of the past. They are hacking, improving, tweaking, experimenting—they are not satisfied with the tools of their predecessors. This is very exciting to be a part of as a designer, and in a way I hope to expose a broader audience to what these talented people dedicate their lives to. In regard to the exhibitions, I searched to find a contemporary response to Paul Renner's masterpiece. After exhausting several possibilities with multiple design directions, I selected LL Circular, a recently released typeface from Laurenz Brunner, one of my favorite typographers. Circular provided the ideal structure for experimentation—it feels familiar but still pushes the boundaries of what a geometric typeface can be. It’s friendly and approachable but still rooted in a classic sans serif tradition, where all flourishes and artifice have been stripped to reveal a simple and unified structure. 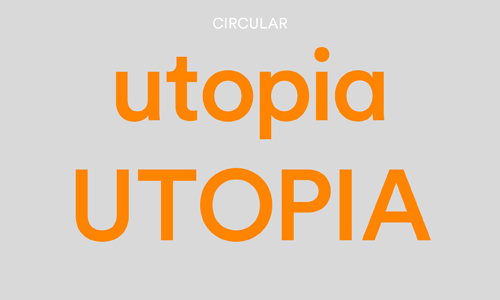 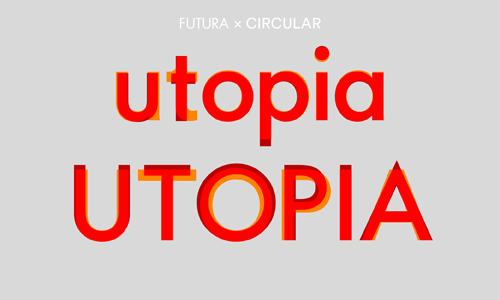 The next phase involved altering the letterforms, attempting to reveal how they are built—not only to symbolize the physical labor of the early kibbutz settlements, but also to connect more to the central question of the exhibition: What is utopia? Everyone has a different answer to this question, because to me the concept is about hopeful possibilities, and as humans we can't help but imagine some version of an ideal future. The idea that the letterforms could be "open" or almost unfinished also fit into this notion that utopia can be interpreted in many ways, and created a synergy with the social experiments of the early kibbutzniks. In the end, we really enjoyed how the inline typography felt like the lines were collaborating side by side, to create something none could achieve alone.

The final challenge was to link the two exhibitions visually, through typography, color and construction. The exhibitions are in dialogue and in close physical proximity to each other, so it was important that the design connect them and represent their conversation.

How was the work first received at The CJM?

When we present identity design work, there is inevitably a favorite that quickly outshines the rest. For Work in Progress, the work you see on the walls of The Museum stirred the most immediate discussion and consensus. One of my favorite parts of the design process is listening to people's thoughts, fears, and insights. Just like utopia, design work can often be widely interpreted. One of my favorite insights from this first presentation was from Curatorial Associate Claire Frost, who suggested that the typography symbolized "pathways." I think this was a key sign that the work was headed in an interesting direction, since this reinforced the notion that utopia can be imagined both individually and collectively. I believe the identity reinforces the idea of working in unison for something greater, whether it be community, freedom from the past, or even the notion of building for future generations.

You’ve also created a takeaway guide for To Build and Be Built: Kibbutz History. What is the concept behind this piece?

This was an interesting challenge. Part of the installation is a long strip of text along the bottom of the display case. Claire Frost envisioned mirroring this display in a print piece that visitors could take home with them. We wanted the piece to be intimate and pocket-friendly, but also unexpected. So we decided on a clever bookbinding technique that uses a center slit to transform a poster into a multi-page booklet. It requires hand folding which adds to the labor, but the result is a piece that feels built by hand rather than machine, which hopefully creates a more engaging experience with the content.

Was this your first exhibition design project?

As a designer, yes. During my university studies and post-graduation I worked as a preparator at the University Art Museum (now the Berkeley Art Museum), so I have helped build and install dozens of exhibitions. I was fortunate enough to meet and collaborate with some of the world's best artists from a very impressionable age. This stage of my life definitely influenced the kind of design work I seek out and produce. In a way, exhibition design has always been in my DNA, so it's exciting to be coming full circle with this opportunity at The Contemporary Jewish Museum.