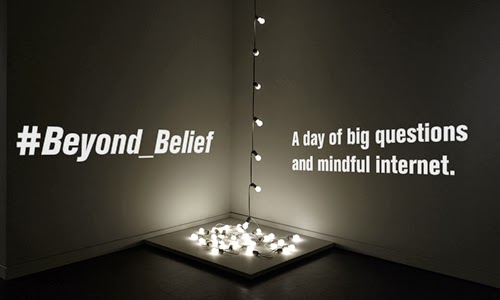 Inspired by our collaborative exhibition Beyond Belief: 100 Years of the Spiritual in Modern Art (on view now through Oct 27), the San Francisco Museum of Modern Art and the Contemporary Jewish Museum hosted a day of mindful social media. Since “spirituality” means many things to many people, we thought it would be interesting to tackle the big questions raised by the exhibition in short, concise answers. Here’s an overview of the conversation by social media wranglers Kathryn Jaller (The CJM) and Willa Koerner (SFMOMA).

Q1: What inspires you?

If we knew exactly where inspiration comes from, we’d be in that place, or doing that thing ALL THE TIME. But participants shared some memorable moments of that sought-after spark, and everyday sources of energy and excitement.

@SFMOMA I am inspired by my 1st interaction with an artwork I love. I think each location as well as my emotions. #Beyond_Belief
— kim drew (@museummammy) October 9, 2013


Q2: Have you ever had a spiritual experience with a work of art?

When asked why they come to museums, many visitors talk about the calming effect of visiting galleries, or the way that artwork can affect them on a highly personal level. For many, museums are a sacred space. With this question, we learned that works of art can help people feel connected to both the world, as well as with their own inner consciousness.


@SFMOMA As a viewer when you experience the moment where you, the work and the creator are now one is incredibly sacred. #Beyond_Belief — Mona (@MonaKhan123) October 9, 2013


Q3: Has art ever helped you through a tough time?

This is a very personal question. Several of the pieces in Beyond Belief were created with the influence of a tragedy or trauma. We were humbled by the willingness to share personal challenges, and for the art therapist who piped in to speak about the role of creativity in recovery. Facebook user and art therapist Venus Taylor replied with the following:

Trauma and intense emotions get stuck in areas of the brain difficult to access through talking. Art gives the opportunity to express those emotions. I used to hang on to my anger even though I wrote in a journal every morning. When I finally started addressing anger in my artwork, I started to become more calm and my coworkers commented that I was changing yet they couldn't put their words to what changes they saw in me. Also, I like to show people new ways to express themselves, to get them out of their perfections (i.e. the shading has to be right, the circle they drew has been erased repeatedly because it wasn't round enough, etc) and I get to see them in a playful light where they are not oppressed from their own thoughts and rules for how things are supposed to be.

Q4: Do creative rituals play a role in your daily life?

Whether you get up early to meditate, keep a sketchbook, or take long walks, there’s no doubt that giving your mind some time to wander is great for unleashing creativity. After all, who can stand to think in straight lines all the time?


@SFMOMA @Jewseum I paint what I REALLY REALLY REALLY want to paint and that keeps me happy, a gift from God.
— Miche Watkins (@MicheWatkins) October 9, 2013


Creative rituals keep us sane..... or at least as sane as we can be. #Beyond_Belief
— GalleryDaily (@GalleryDaily) October 9, 2013


Q5: What does "spirituality" mean to you?

Living in San Francisco, it is easy to roll your eyes when you hear the word “spiritual,” if only because this is a place that is very accommodating towards many different definitions of what it means. Despite being shown in a Jewish museum and with layers of Jewish interpretation, there is no one answer presented to this complex concept, and our conversation reflects this.

Talking about spirituality in concrete terms can be difficult, if only because it’s so challenging to grapple with in a meaningful way. Some of the questions addressed in Beyond Belief have been talked about for millennia by thought leaders, and yet we still don’t have concrete answers. If there’s one thing to be learned, it’s that the best questions lead to more questions, and despite social media being a playground of popular culture, there's room for this recent iteration of a generations-long human conversation as well.

About the Authors
Kathryn Jaller is New Media Manager at the Contemporary Jewish Museum where she translates visual culture for digital audiences. Willa Koerner is Assistant Manager, Digital Engagement at the San Francisco Museum of Modern Art, where she brings art and social media together in creative, meaningful ways. In addition to this exhibition, they also have height and cats in common.
beyond belief SFMOMA