In 1968, Jerry Cimino was in the eighth grade when the world exploded. Martin Luther King, Jr. and Robert F. Kennedy were assassinated. Russian tanks were moving into Czechoslovakia. The Vietnam War was escalating and there were race riots in the streets of America. Cimino grew up thinking that he was going to Vietnam. His high school English teacher read Lawrence Ferlinghetti's poem, “Sometime During Eternity” to the class. Having attended a Catholic school, Cimino had never heard or read anything like it before. Using a hip-bopster language, the poem reinterprets Christ's crucifixion in a shocking way. He was fourteen years old and completely unaware that this Beat poem would influence his life’s direction and work.

The Beat Museum, located in North Beach, is celebrating its ten year anniversary this year. Devoted to the Beat Generation’s history and legacy, the Museum authentically portrays the Beats, their writing, and their actions. The history of The Beat Museum is just as much the history of Cimino, the founder and director. He has created a network of the living Beats, their relatives, and various Beat fanatics. Not only is Jerry the director but he is also the curator. “I am a one man show. Brandon and I do 95 percent of it. We can make a decision in the morning and execute it at night." Brandon is one of two staff members employed at The Beat Museum.

Opening a museum dedicated to writers is a bold move. The building is over a hundred years old and admittedly looks it. But that adds to its credibility. The carpet is worn and the floors squeak. Their Beat theme allows some leniency from traditional museums, which honestly, the Beats probably would have preferred.

Jerry Cimino has said, “People don’t mind that we don’t have the original scroll. It’s not the stuff, it’s the story.” Jack Kerouac’s testament to life, On the Road was typed on a single scroll reaching 120 feet long, made from pieces of paper Kerouac cut and taped together. It sold in 2001 at a Christie’s auction for $2.4 million. And just as The Beat Museum is filled with Beat stories, Cimino is filled with stories as well.

Cimino went to college and the draft ended that year, 1973. A poet at the time, he graduated not knowing what to do next. He went to a Baltimore bookstore and rediscovered Lawrence Ferlinghetti whom he’s been introduced to in high school. He bought the book of poetry with his last money. The following week he returned and bought a book of poetry by Jack Kerouac. Then a few days later he met the woman he would marry. These would prove to be some of the formative moments leading to the creation of The Beat Museum.

Soon after that he began his fifteen-year career with IBM. The whole time, he was typing on an old Royal typewriter that his father bought the year Jerry was born for $1. He and his wife grew restless in Maryland and moved to Monterey, California, where his wife opened a bookstore coffeehouse (a new idea in 1991). After five years they closed the bookstore's physical space, but out of that venture they secured two very important addresses: the phone number 1.800.KEROUAC and kerouac.com. They continued to sell Beat books out of their garage through mail orders. Jerry left IBM and started working at American Express. In this role, he traveled all over Europe and went to Amsterdam, where he visited Hash, the Marijuana Museum. It was quite small with only a few glass cases filled with different marijuana strains. He left the museum with his wife and asked her, "If they can have a pot museum, why can't we have a Beat museum?"

Cimino had spent twenty-five years in the corporate world and was looking for a mission. He wanted to combine his ambition with helping people pursue their dreams. He had a lot of business experience and a supportive wife, and decided it was the right time to open The Beat Museum. Originally The Beat Museum was located in Monterey. In 2004 he took The Beat Museum on the road with Neal Cassady's son, John Allen Cassady. Initially the tour was scheduled for three months but due to its popularity they toured for two years. Cimino and Cassady would give a 90 minute performance on the Beat Generation’s influence, history, and spirit.

When the Beatmobile ended touring in 2006, they had visited over five dozen colleges, high schools, and community centers on the East and West coast.  Cimino decided to bring The Beat Museum to San Francisco. He signed a three month lease at a small space on Grant Street. When asked how does The Beat Museum fit into SF? Cimino answers, “We are authentic. Our theme is Beat. People dig it because it’s the heart of North Beach.”


"The mission of The Beat Museum,” as Cimino describes it, “is to spread the values of the Beat Generation: tolerance, inclusiveness, and having the courage to live your own individual truth." Cimino admits to taking a little liberty in creating the mission statement. But he wants to help young people follow their passions, to find their way in life and not be afraid to change directions if necessary. Now that the Beatmobile is retired, schools come to The Beat Museum. Cimino tells students:

"My friend, David Amram, who was a friend of Jack Kerouac's and who gave me inspiration to build the Beat Museum and who is still a working and traveling musician at the age of 82 puts it this way:  ‘We all have people who love us so much that they don't want to see us get hurt.  So they tell us to take the 'safe' route, to be careful and to not take risks.  And you've got to love those people for their concern for you, and you have to bless them for their love, but trust me when I tell you—you need to hang out with somebody else.  You've got to hang out with people who support your dreams.’"

But Cimino also recognizes the cautionary tale in the Beat Generation:

“As long as [they] don’t crash and burn like Jack and Neal did. Jack died of booze and Neal died of a drug overdose. . . . The thing about the Beat Generation is that they allow people to have foibles, and to celebrate what they believed in. . . . Neal Cassady, greatest guy in the world, you’d love to hang out with him, but you wouldn’t want him to marry your sister. Everyone in Kerouac’s books is a sympathetic character, even when they are doing dastardly things. And Jack, he denies his daughter, he denies paternity, he can’t pay child support, he never has a successful relationship with a woman. There’s a lot of things to love about him and a lot of things to be aware of. . . . It is youth and rebellion, it is where do I fit in and what can I get from it and where can I go from it? Many people think it’s about the sex, or the drugs, or the party scene, and we try to steer them towards the spiritual quest. . . .They embraced their differences and celebrated diversity. They wrote about all aspects of their lives, warts and all and allowed us to decipher it.”

The Beat Museum is a uniquely San Francisco institution: a museum dedicated to dead writers filled with lively stories. It also features one of the best bookstores around, selling both vintage and contemporary books as well as cult book ephemera. Stop by and learn more about San Francisco’s literary culture. If you’re lucky, Cimino will be there and tell you about the Beat Generation’s history honestly, in his own words. Because there’s an art to storytelling, and not many people are as talented as Jerry Cimino, founder and director of The Beat Museum, and poet. Sometimes people and places have agendas that are personal and biased. But Jerry Cimino is one of those rare individuals: authentic, passionate, driven, and focused on the stories. Because that’s what’s important. The stories.

> Learn more about The Beat Museum

About the Author
Melanie Samay studied literature at Fordham University in New York and received her Masters in English literature from San Francisco State University. Currently she works in marketing for the Contemporary Jewish Museum. She spends her time reading, walking around the city, sitting in the park with friends, and hanging around dark spaces at night listening to loud music. Read more from Melanie on her blog about books and book-nerdom: http://soifollowjulian.com
beat memories exhibitions

Thomas Raher said…
peightm
Well done Melanie, you and the CJM are keeping the flame of the Beats alive. I've been ensconced in that mental world since the '60s, and each time Mr. Cimino's Beat Museum or CJM's exhibit project publicly all I revere, I'm pleased.
August 30, 2013 at 4:23 PM 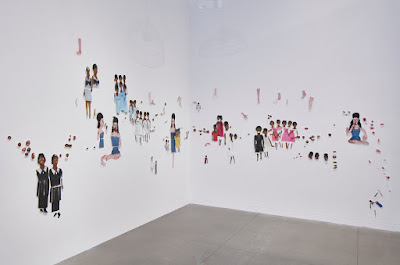