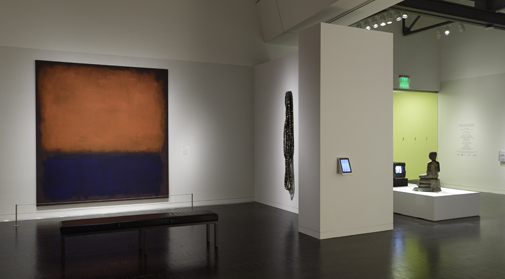 “Is this is how you define spirituality?”

“How does it all come together?”

Visitors to The Contemporary Jewish Museum’s (CJM) exhibition Beyond Belief: 100 Years of the Spiritual in Modern Art, co-presented with the San Francisco Museum of Modern Art (SFMOMA), are delighted and/or surprised by what they find. Most have questions; some argue with the categories; others are awed into silence.

And that’s kind of the idea.

Beyond Belief began as a more limited idea, exploring the work of several Jewish artists in SFMOMA’s permanent collection. The connection between the Jewish bias against figurative depictions of God (as in the Second Commandment, which forbids the creation of idols for worship) and the spiritual possibilities of abstraction was a key idea. But like a spiritual journey, which builds in knowledge even as it goes off on new paths, the exhibition began asking questions that weren’t even on the table in the beginning: Is modern art a secret spiritual language? Is the creation of art a bit God-like? What does the afterlife mean for an artist hoping his or her art will last for centuries? There are no answers to these questions, only more questions—the most apparent lesson in the 6,000 pages of law, stories and ethics known as the Talmud.

Each of the ten sections of the exhibition such as "Genesis" or "The World to Come" echo the approach of an individual page of the Talmud—a conversation among great thinkers springing from a legal or ethical prompt with no obvious answer to the question under discussion. The logic of this collection of books is the logic of real life—organic, messy, evolving, surprising. Its goal is to provoke the sharpest, more relevant next question, with the expectation that the conversation will continue soon and with even greater vigor.

Ultimately, the Jewish legal tradition attempts to answer urgent religious and social concerns. But the experience of the Talmud, like the best experience in a museum gallery, is the journey itself—toward self-discovery, greater knowledge, and an expanded consciousness. 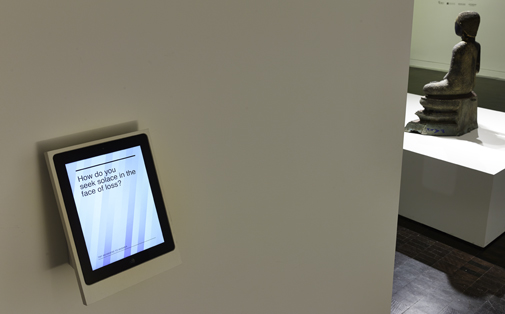 As part of The CJM’s attempt to provide signposts on this journey—what my colleague (and our designer) Brad Aldridge described as “conceptual wayfinding”—we created a separate website allowing visitors to go deeper into individual works and themes. In the gallery itself, we set out a series of iPads asking visitors to “check in” with themselves between sections. The iPads ask questions like “What inspires you?” followed by links to artists’ responses to the same question. Here again the Talmud provides inspiration; an urgent question blossoms into a series of potential answers, whose value is to help prompt the next question. Visitors familiar with a mezuzah—the ornament affixed to the doorways of Jewish homes containing biblical verses—might see in the placement of the iPads a prompt to stop and reflect as one moves from one space or room into another.

As a co-curator of Beyond Belief, visitors often ask me if there is an overarching idea. My answer? Presence.

In Judaism, one of the names of God is Ha Makom, translated as "The Space," or "The Presence." Similarly, in the Bible, God engages in a call-and-response with several figures, especially Moses. “Where are you?” God would ask. “Hineni” they would answer. I am here; I am present. The highest spiritual quality for Biblical figures, by extension, is the capacity to be present with God, Spirit, The One—however he/she/it might be defined.

Standing in front of Mark Rothko’s canonical No. 14, 1960, its shimmering blues and reds an ever-expanding gift, many visitors simply stare. There is nowhere else to go and nothing else to think about. Rothko himself thought of his work as a portal into revelation, hoping that, “The people who weep before my pictures are having the same religious experience I had when I painted them.”

When I stand in front of Rothko I begin to imagine a language for the experience Moses might have had at the Burning Bush. To force his attention, God asked him where he was, and Moses answered: “Hineni.” I am present. Presence, in today’s scattered, digital world, is priceless.

About the Author
Daniel Schifrin is Writer-in-Residence at the CJM and host of its podcast series “The Space Between.” He is a columnist for both the J: Jewish News Weekly of Northern California and the New York Jewish Week, and his articles and essays have appeared in the Los Angeles Times, San Francisco Chronicle and McSweeney’s. In 2007 he was a visiting scholar at Stanford University, and he has just finished his first novel, a comedy about chess, opera and orthodontia.
beyond belief curator dan schifrin exhibitions