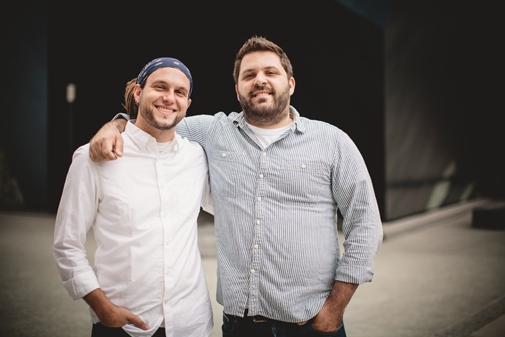 It all began with a nonexistent sandwich. Leo Beckerman and Evan Bloom wanted a quality pastrami sandwich but could not find it in San Francisco.

The two southern California men met in Hillel’s kitchen while attending UC Berkeley, where they started a weekly kosher barbeque. They used a camp stove that served the 200-250 attendants; it became so successful that they had ten people helping in the kitchen. Their theme was not always Jewish: they made jambalaya, Mexican food, and Chinese food. But the recurring motif was creating community over food.

After graduation, each took a different career path but met over meals. Leo drove from LA with a meat smoker in his car trunk. And then the quest for the perfect pastrami sandwich began. In October 2010 they became serious: leaving their jobs, planning, and testing recipes. They started as a pop up and went through three different locations before graduating to the Ferry Plaza Farmer’s Market in fall 2011, for regular breakfast and lunch, which they still do today. In January 2011 they signed on to sell as a pop up at the Ferry Plaza beginning with only brunch. Leo could not make more than two loaves of bread at a time (so sandwiches were not an option). They moved three times and each time was a step up. People became regulars and followed them as they moved. And finally in October 2011, they signed the lease at their Mission District location which opened in February 2012.

There were a few grease fires in the kitchen. The first pastrami they made was good. Thinking they could improve it, they changed the recipe but it was so bad, it was disheartening. They went through twenty different recipes for pastrami and had a similar experience with pickles. They made some amazing jars of pickles. Then they made a bucket of pickles. A week later, when they opened the bucket, the pickles were a failure. As Leo lamented, “There’s nothing you can do about it. You’ve waited around. I mean I was close to tears. Large batches. We had to throw them away. A waste of cucumbers and time and energy . . . You do the work upfront . . . and then you have this down time and it’s hard to be patient. And then you’re waiting and waiting . . . At first it was very disappointing.” What is interesting is that their two biggest failures became their biggest successes. 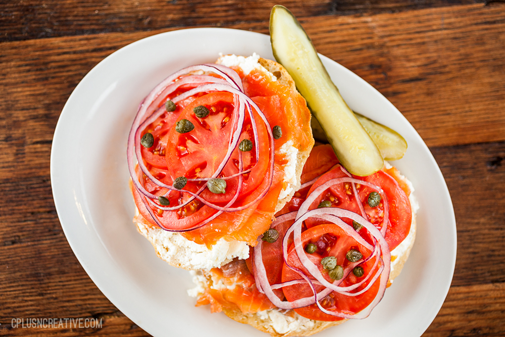 Since starting their first pop up, the Wise Sons have received both local and national press. The San Francisco Chronicle writes, “With this revival they are trying to undo generations of assimilation and take back their culture, but with a more modern point of view.” While food is the primary focus of their acclaim, there is a great respect and almost gratitude for the chefs’ homage and attention to their food history. Asterisk magazine writes, “Bloom and Beckerman have taken the recipes of their parents and grandparents and elevated them using professional kitchen techniques and imaginative San Francisco flair.”

The idea of a Jewish deli at the Contemporary Jewish Museum seems natural. “We are excited to be at the Museum. In a lot of ways, we are Contemporary Jewish Food . . . Whoever had pastrami cheese fries? But at the same time, if you take a look at the pastrami sandwich, we smoke it here and slice it here to order, and we make the bread here. We are not updating the dishes. We are just bringing the technique and the care that it deserves . . . Historically, it wasn’t like a deli [today] where there’s a fifteen-page menu with 150 items . . . Who can make all that stuff? . . . And it wasn’t nearly as much about the quantity of items as about having a couple of things that they did well there. That’s what we try to do. We’re in the middle. We’re a bakery, we’re a smokehouse, we’re curing our meats . . . We’re certainly not trying to be what we imagined a deli would be in the 1900s. But that mentality of making things in-house, of the highest quality, knowing your product, and knowing your customer is important to us.”

Evan and Leo are cultivating quality food by doing food narratives justice. They focus on Jewish food because they believe it has not gotten the attention and care that it deserves. There are a lot of dishes that have fallen out of favor and disappeared from our tables. Maybe they were made with canned vegetables but if they are made well, with fresh ingredients, they can be brought back to life. This is our food history. And the Wise Sons are redefining it in a delicious way.

Now open, Wise Sons features many of their signature dishes, some new sandwiches, salads, and more vegetarian options. Food is available in the dining room, as well as through the takeout window. Their hours vary slightly from the Museum, opening early and offering breakfast featuring Beauty’s Bagels (from Oakland) and coffee from De La Paz. Enjoy some quality food with friends and family in the redesigned café. Take home some of their freshly baked breads and pickled preserves today!

> Check out the menu
> Hours and location information 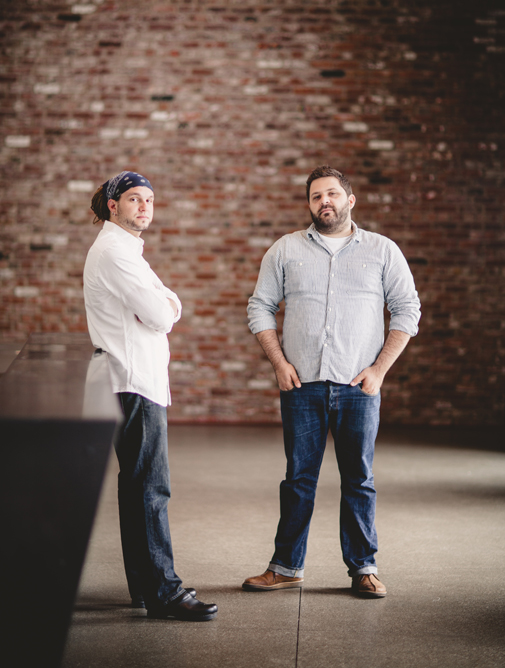 Photos of Evan and Leo by Gary Sexton Photography.

About the Author
Melanie Samay studied literature at Fordham University in New York and received her Masters in English literature from San Francisco State University. Currently she works in marketing for the Contemporary Jewish Museum. She spends her time reading, walking around the city, sitting in the park with friends, and hanging around dark spaces at night listening to loud music. Read more from Melanie on her blog about books and book-nerdom: http://soifollowjulian.com
events and lectures food melanie samay wise sons