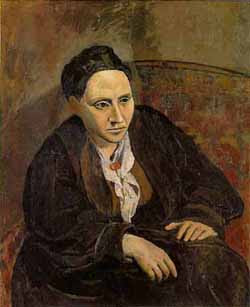 by Renate Stendhal, Ph.D., author of Gertrude Stein: In Words and Pictures.

Walking through Seeing Gertrude Stein: Five Stories, I noticed that the show is just like Gertrude Stein herself: sumptuous, good-humored, highly intelligent, brainy and eccentric, sophisticated and unpretentious all at the same time.

In my first blog post about the exhibition, I said, “In the cornucopia of photographs, original art work, posters and of course books, there is enough of the familiar (the art-covered studio walls at 27, rue de Fleurus, the portraits of Stein by all the famous photographers and artists, the Ford, the dogs and the country house) to set a solid base for the intention of the show to present Stein’s less familiar faces.” What a welcome shock then, to walk across the street, around the block, and take in the second exhibition, SFMOMA’s The Steins Collect: Matisse, Picasso and the Parisian Avant-Garde. Here, two of the most familiar aspects of Gertrude Stein are presented in overwhelming richness: the Paris studio where the salon took place, as well as the collection of avant-garde art that Gertrude, her brothers Leo and Michael and her sister-in-law Sarah Stein collected at the very beginning of the 20th century. We follow picture by picture how Cézanne, Matisse, Picasso and the most exciting revolutionaries in fauvist and soon cubist painting came to fill the rooms of these “Four Americans in Paris,” pioneer patrons of modernism.

With the combination of both shows, we now have many stories inviting us to compose a portrait of the woman who is at the center of what has been coined “the Summer of Stein.” It has never before been undertaken to compose a portrait of Gertrude Stein’s personality in a museum show. The thrill and vastness of modernism at the moment of its birth has never been so vibrantly presented in a personal context as in The Steins Collect. Never before have two San Francisco museums collaborated in one shared investigation: exploring the imprint of personalities on art and the impact of art on those who saw, loved and bought it, who talked and wrote about it—particularly one person who engaged deeply with both art and writing: Gertrude Stein.

To me, the most touching aspect of wandering from Seeing Gertrude Stein over to The Steins Collect, was coming face to face with the portrait that got it all started and seems to sum it all up: Picasso’s famous portrait of Gertrude Stein from 1905-06. The portrait has a small pre-history. A young, unknown Spanish master painter who had trouble mastering French, met with a new American expatriate who had the same trouble. Language notwithstanding, the two of them clearly shared a temperament that Stein defined for herself as “aggressive liveliness.” Stein remembers their first social meeting in The Autobiography of Alice B. Toklas:
“Picasso in those days was what a (…) friend of mine (…) called, a good-looking bootblack. He was thin, dark, alive with big pools of eyes and a violent but not rough way. He was sitting next to Gertrude Stein at dinner and she took up a piece of bread. 'This', said Picasso, snatching it back with violence, 'this piece of bread is mine.' She laughed and he looked sheepish. That was the beginning of their intimacy.”1

The unknown young painter had endeared himself to his American patrons by doing sketches of Leo and nephew Allan Stein. It was natural that he would want Leo’s massive, striking sister to model for him as well. Day after day, Stein tells us, she would walk up the steep hill from Montparnasse to Picasso’s studio in the dilapidated Bateau Lavoir on Montmartre to sit for him – a legendary story, especially considering what the excellent SFMOMA catalogue tells us: Picasso usually worked with enormous speed. But when one knows that Stein simply loved Picasso’s company and loved to pose, the story makes sense. “During these long poses (…) Gertrude Stein meditated and made sentences.” 2

Famously, Picasso one day wiped out Stein’s face on his easel, annoyed that he could no longer “see” her, then he set out for a long sojourn in Spain. Upon his return he quickly painted in the face the way he usually worked: fast and from memory. Nobody thought the portrait looked like her. During Picasso’s time in Spain, a shift in his style had happened. The primitive art, the African masks he had often discussed with Leo and Gertrude, as well as the flattening effects of photography had entered his work. The way Picasso “remembered” Stein’s face after his return gives her face a mask-like, abstract quality that makes her more than real. An expression of brooding together with a sharp intelligence and mental concentration are the predominant characteristics captured in the portrait. Other facets of her personality can be found in Seeing Gertrude Stein—her good-natured, no-nonsense self-presentation, her sensuous nature, and her childlike playfulness, always ready for a “beefsteak laugh.”3 As co-curator Wanda Corn pointed out at the opening of Seeing Gertrude Stein, Picasso portrayed her the way only men used to be portrayed in classical painting. She doesn’t hold a fan or flower in her hands or wear a fancy hat. She doesn’t cock her head with feminine charm. She simply leans forward, representing only herself. With this groundbreaking portrait, Picasso rids himself of the bounds of classical painting, and at the same time breaks Stein free from traditional gender limitations.

This is how most later artists and photographers depicted her, the way Picasso once addressed her jokingly: “Mlle Gertrude Stein, homme de lettres”, man of letters.4 To Stein herself, Picasso’s portrait was the one that she most identified with: “...for me, it is I, and it is the only reproduction of me which is always I, for me.”5 To Picasso it was irrelevant that viewers didn’t quite see the resemblance in the painting. “Yes," he said, "everybody says that she does not look like it but that does not make any difference, she will…”6

Picasso’s new style of painting—it would soon lead to Les Demoiselles d’Avignon and Cubism—gave Gertrude Stein a mysterious impenetrability, the mask of a sphinx perfectly attuned to the riddles she posed in her experimental writing, the aura of sibyl who would be ridiculed as the “high priestess of modernism” or admired as “the mother of the Lost Generation.” The one who taught Hemingway and the other young American writers at her salon that “remarks are not literature.” 7 Going from one museum to the other and back again, we can trace the birth of a portrait that embodies the timeless mysteries of portraiture, the birth of modernism, the potency of the dialogue between visual art and writing, and the power of image-making. We are indeed seeing Gertrude Stein, Picasso’s Mona Lisa of the twentieth century.

Renate Stendhal, Ph.D. (renatestendhal.com) is a German-born, Paris-educated writer, writing coach and spiritual counselor with a private practice in San Francisco and Pt. Reyes Station. Among her publications are True Secrets of Lesbian Desire: Keeping Sex Alive in Long-Term Relationships and the Lambda Award-winning photobiography Gertrude Stein: In Words and Pictures. Her Gertrude Stein blog “Quoting Gertrude Stein” can be found at quotinggertrudestein.com or on facebook, and her cultural reviews can be found at scene4.com. She just finished a Parisian novel, Catch Her If You Can.

Unknown said…
Actually, Gertrude Stein has been horribly misrepresented by the CJM. While she she may have been interesting, and maybe even an intellectual, this exhibit does not honor the TRUTH of her life. In fact, it perpetrates a lie, as Gertrude as a "patriot", a patron and role model. Her anti-semitism, personal desire to have Hitler be awarded the Nobel Peace Prize, and helping a convicted war criminal escape to freedom, speaks a different story, one which is difficult to reconcile with the this exhibit. I, for one, am not proud to share my Jewish heritage with her. What a disappointment, and disgrace for the CMJ to be hosting such an exhibit, and perpetrating an illusion. One can tell a lie simply by not sharing the full truth. Gertrude Stein was a narcissist, not a friend of the Jewish People. Read the Wikipedia Political section for Gertrude Stein, or take the docent-lead tour of the Exhibit for a fuller, disturbing picture of this "Great" Woman.
August 22, 2011 at 7:49 PM