An Artist Responds to Charlotte Salomon’s Life? or Theatre? 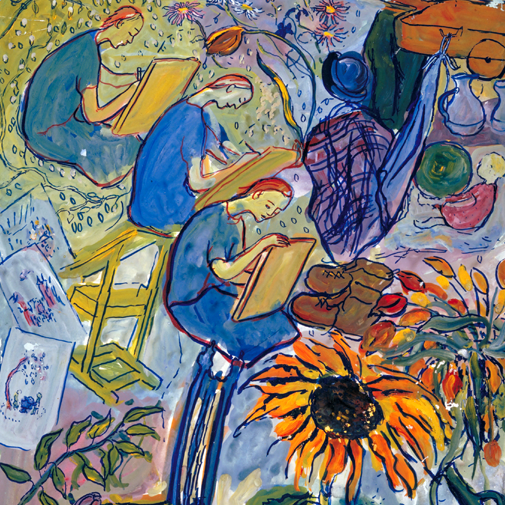 Faced with the Nazi invasion of Poland, my grandparents made a heart-wrenching decision in 1943 to hand over my father to relative strangers in the hope that he might live. He was only six years old, suddenly parentless, and he faced physical danger day and night. His survival had been no sure bet. My grandparents must have understood that their end was coming and that my father’s life was the only slim hope of extension. Such risks, to me, were not only acts of protection, but also acts of defiance and survival—ways that Jews could passively continue on. I can imagine my grandparents thinking like Charlotte Salomon, “Keep this safe. It is my whole life.” Our births, our children, are a testament to our existence. We were there, in beauty and in struggle, and that is not something, no matter how many millions gone, can be denied.

There are many unheard stories of everyday individuals who stood up against the German army and who fought back knowing they were outnumbered and unarmed. In desperate times there are ways in which artists create a rich inner life. I’m not sure how entirely consoling it is, but it is something. The act of art is almost a universal religion. Creativity is not just how beautifully one draws, but how beautifully one draws from within, speaks out, and carries their message forward. Sometimes, there is no other way. It’s doubtful that Salomon thought of such things entirely while working. But I am certain it was with some consciousness of validation and continuation. This is in part what makes her work so powerful.

I was introduced to Salomon’s art after wrestling with my own concerns about my work, namely music, and the sad lingering question of its prolongation. It has been an exhausting decade of writing, performing, organizing. At one time, music was my dearest salvation. Art was a space in which I could confess my darkest true-life tales and surrender to both souvenir and examination.

Like Salomon, I know a little bit about retelling one’s life history. It has often been entirely essential to do so and within that, there is no disconnect between art and artist. It’s an umbilical cord. When work is so personal it is an extension of oneself, it can feel like offspring and the desire, as I’ve experienced it, is that it will keep living long after you’ve retired or passed on. It is a strong sensation to give so much. And quite obvious Salomon had such a gift of giving herself.

Like a lot of little lives, not everything created is meant to last. Not every artist shall be heard or seen. If you happen to be an artist, consider the tasks of someone like Salomon. It’s a good reminder to me of what is most prized in one’s efforts and the true goal of construction. Loving the process isn’t always something one recognizes in a painting as we stand in front of it at a museum. But that is something you can immediately distinguish in Salomon. One has to wonder how many more great series Salomon was capable of creating. While her light was so early extinguished, we still have the brilliance of her work that carries an essence of someone with hopes and dreams. In some strange metaphysical way her life did continue on. Is that something we can consider?

Salomon may have lived in another time and while hers is perhaps part of a vast collective of Holocaust stories, bear in mind that her work is just coming to light now and thus, so is she. Artists exist among us, but no one is to say when in history their work will arise and find its way into our contemporary mindset. Artists are in fact, survivors whether they live or die, young or old. Immortal. It is only a matter of time before we are educated to their rare and significant presence.

About the Author
Rykarda Parasol uses the term “Rock Noir” to best describe her brand of dark and mysterious music. In it, there is a cinematic component that calls up images akin to David Lynch or Alfred Hitchcock giving way to an icy blonde plot. Indeed, the notion of the smart fearless femme fatale is an image that Parasol finds intriguing and one that her low sultry sing/talk seems to embody. Often compared to the likes of Nick Cave and The Velvet Underground, Parasol’s music personifies both swamp and sophistication. A uniquely gender-bending voice, her strength is in delivering William Faulkner-like tales with conviction and suspense. Her music draws on American rock, soul and southern influences as well as the Northern European styles imparted to her by her parents. Parasol has self-produced and self-released two acclaimed albums (“For Blood and Wine” 2009 and “Our Hearts First Meet” 2006). A strong presence on the San Francisco music scene, Parasol continues to write songs based on her true-life occurrences and performs near and far.
art charlotte salomon exhibitions holocaust personal stories rykarda parasol

Unknown said…
I so appreciate this piece, and happy to find it, having just discovered the artist in an Art in America review from 2001. Great, well-written piece, an inspired reflection. Thank you.
April 10, 2013 at 9:59 PM