Thoughts from scribe-in-residence Julie Seltzer on what she's writing, her process, and the experience of writing a Torah on public view.


Sometimes I like to stop and just stare at the wall.

A really great wall to stare at is the one that leads into the Torah exhibition. Many visitors pass by without more than a glance, unable to decipher the Hebrew-laced barcode symbols that plaster the hall on either side, to the right and to the left. It’s actually my favorite part of the exhibition, this piece by Israeli artist Dov Abramson. The wall is patterned in the 613 mitzvot (commandments), with little icons symbolizing to whom and where the mitzvot apply, and what scary form of punishment will follow if they are transgressed.

The 613 mitzvot are probably not what many of us imagine they are. For one thing, not everyone agrees on what the 613 mitzvot even are. The wallpaper goes according to the list compiled by the Rambam (Maimonides), which includes hundreds that pertain to the Temple (not your local one; the ancient one); many that apply only in Israel; as well as simple and seemingly insignificant ones, such as salting bread.

On the holiday of Shavuot a few years ago, I found myself reading this very list with some others from 1 AM til dawn. There is a tradition of staying up all night studying Torah, and what could bring us back to the source better than learning the 613 mitzvot? We went around in a circle and read each one out loud. I’ll never forget two of the mitzvot that landed on me:

2) To write a sefer Torah

Taking challah is one of the only mitzvot that applies specifically to women (represented by a skirt on Abramson’s wallpaper labels). I was working at the time as a baker, and fulfilled this mitzvah almost daily. The word “challah” came to mean the special braided Shabbat bread, but the word comes from a torah law to set aside a portion of our bread for God. In Temple times, this portion went to the priests. Post-Temple times, we say a blessing and symbolically burn a small piece of the dough.

As for writing a sefer Torah, I’d already begun to learn scribal arts, so the idea that I might someday write a Torah was not totally inconceivable, though it certainly seemed far-fetched. Of course, this mitzvah doesn’t apply to skirts, only to pants. If I wore pants, maybe the mitzvah of writing a sefer Torah could apply to me as well.

A girl can dream can’t she?

Writing a sefer Torah is mitzvah #613, the very last. The order of the list of mitzvot is chronological, based on where the mitzvah’s source is found in the Torah. For example, the mitzvah of “Pru U’Rvu,” to be fruitful and multiply, is mitzvah #1, derived from God’s command to Adam and Eve at the beginning of Genesis. As an interesting side note, this mitzvah of “be fruitful and multiply” doesn’t apply to skirts either. It’s not totally clear to me how pants can fulfill this mitzvah without the help of skirts, but where there’s a rabbinic will, there’s a halachic way.
Anyway, back to the wallpaper. It’s an impressive feat to poke fun at a tradition while still revering it. Stark little symbols indicating whether you will get hanged, burned, or stoned for transgressing a mitzvah is pretty funny (only because we don‘t fulfill them!), but it’s also deeply engaged with the details of the system. The system, represented in bar-codes, is indeed an authentic and complete one. But once you step outside and stare at it in its two-dimensionality, you have to at least chuckle at the absurdity of it all, even if you are a part of it -- perhaps especially if you are a part of it. It’s our ability to not take ourselves too seriously that we (both us and the system) will have enough breathing room to stay in good relationship with each other, through the thick and the thin, til mashiach do us part.
---
Based on Six Hundred and Thirteen by Dov Abramson (a variation on the Ner Mitzvah project, 2009). Digitally printed wallpaper. Courtesy of the Artist.

Photos by Bruce Damonte, courtesy of the Contemporary Jewish Museum (top-bottom: a detail of one of the commandments, a section of the wall in the gallery, and a view of the wall leading in to the exhibition As It Is Written: Project 304,805). 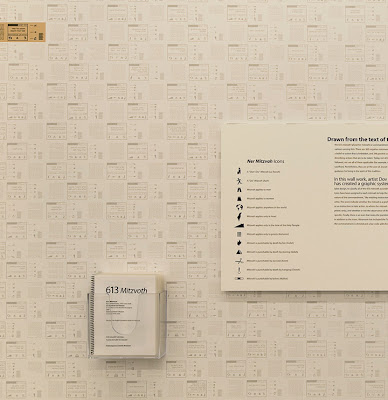 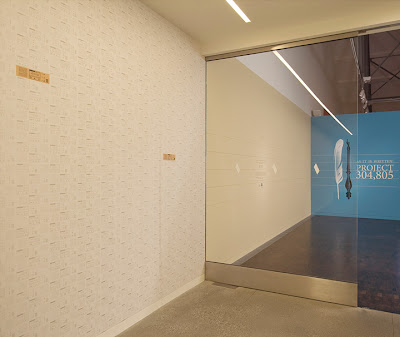 Robert Hagedorn said…
Yes, the very first commandment God made to Adam and Eve was to "be fruitful and multiply". (Obviously, he didn't speak to them in English.) For a slightly different perspective please do a search: The First Scandal Adam and Eve.
January 11, 2011 at 2:07 PM