Any Excuse To Get Chocolate 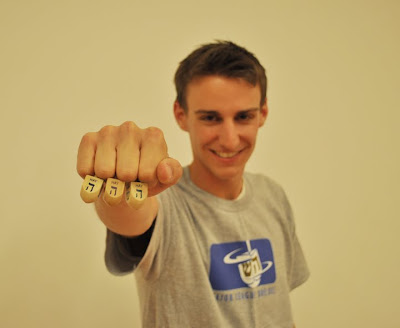 The San Francisco Giants aren't the city's only champion this year. San Francisco is also home to Johnny "Hei'z" Heywood, the reigning Major League Dreidel champion, who this Thursday, December 2, will be at the Contemporary Jewish Museum for RitLab.

Last December, the 27-year-old Heywood knocked off competitors like Spincent Van Gogh, Spinny the Pooh, and Spindianna Jones on his way to becoming the first gentile champion of Major League Dreidel.
Started by New Yorker Eric Pavony, Major League Dreidel (MLD) is a knockout-style tournament in which competitors see who can spin a dreidel the longest within a six-sided arena (shaped like the Star of David), that gets smaller as rounds progress. At a family Hanukkah party in 2006, Pavony decided to give the traditional game a modern spin, and started a mini-tournament with family and friends competing in an arena built out of his mother's cookbooks. Everyone got into it, and with experience gleamed from beginning the first-ever competitive Skee-Ball league, Pavony began MLD. Today Pavony is MLD’s Knishioner, and the league boasts hundreds of participants from all over the country and additional competitions in Miami and Denver with plans to expand in 2011. MLD also sells the Spinagogue, the first-ever dreidel spinning stadium, nationwide at Bed Bath and Beyond.

Heywood, who grew up in the East Bay, was introduced to the dreidel as a kid and, looking for any excuse to get chocolate, quickly took to it. In 2009, he was living in New York, when he heard about the MLD tournament from friends. Thinking he had a shot, Heywood registered, got his own dreidel, and began practicing on his living room table.

Round after round, under what he described as a surprising amount of pressure, Heywood kept spinning. In the final he faced off against the "Virtual Dreidel," Howard Pavony, the father of Eric. A quiet, intense man with huge forearms that produce a big spin, the senior Pavony was the defending champion and the fiercest competitor Heywood had ever faced. In his signature style that marries control with clean, sweat-free hands, Heywood hit the center of the arena with smooth, tight spins. Somehow, he won.

"I had no idea I was going to do as well as I did. But, every round I kept advancing, and ended up winning," said Heywood. "It turned out that I kind of got the hang of it right in time."
Now known as the "Gentile Crocodile," Heywood will return to New York next week to defend his crown. Though he harbors no illusions of making a career out of dreideling, Heywood has enjoyed his time at the top and the opportunity it has brought to show non-Jews and Jews, who often see the dreidel as decorative, how much fun spinning a dreidel can be.

At RitLab this Thursday, he’ll be judging a tournament and coaching spin. For those just starting out Heywood offered what led him to victory:
“Don’t do too much,” he said. “Go for a controlled, smooth spin, and get your form down.”
dreidel major league dreidel public program ritlab