By The Contemporary Jewish Museum - October 05, 2010
by James G. Leventhal

Jaron Lanier came to speak at the Contemporary Jewish Museum as part of the Museum's LINK program,, a Jewish, Art, and Technology initiative at the CJM.

Jaron Lanier purposefully positions himself as archaistic. He wants you to read a book. He wants you to think before you "tweet." He is also sometimes credited with inventing virtual reality. That's right, inventing virtual reality. And he has helped to craft some of the finest future visioning in a Philip K. Dick film, yet, as a creative consultant on Minority Report. He has jammed with "Q," Ornette Coleman, and been on tour with Yoko Ono. 
Hearing Jaron Lanier speak at the CJM was a thrill for me. I'd been reading Lawrence Lessig and Chris Anderson, and was all excited about the 'wisdom of the crowds' and the potential of mass collaboration and social media's power to build networks and layers of meaning.

So I was excited to dig into You Are Not a Gadget, figuring it would be an apt counterpoint; but, instead found something of an indictment of this Clay Shirky Here Comes Everybody way of thinking:


The new twist in Silicon Valley is that some people -- very influential people -- believe they are hearing algorithms and crowds and other internet-supported non-human entities speak for themselves. I don't hear those voices, though -- and I believe those who do are fooling themselves.

Jaron Lanier, You Are Not a Gadget p. 39

Wow. it stopped me in my tracks and made me question a lot that had informed my now-and-future world view. Lanier's not really throwing out the baby with the bathwater, so to speak; but he is encouraging a consistent "turning off" or "tuning out." Go for the individuated longplay. 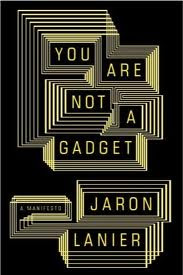 There's another important layer that has to do with ownership of knowledge and the fact that "the corporation" owns all this "sharing." Lanier is keenly attuned to this, even invested in it, as he points out. There is something chilling about who owns what we are creating and sharing so openly. A question, I think, as yet unresolved in its implications; especially as, in my opinion, these new sharing spaces being driven by corporations have added such tremendous good in the world so far. And it may be only in our quietest of moments that we truly own our own thoughts. Isn't value defined in exchange? How then do we determine value outside of those known channels? This blogging space is run by Google, for example.

And when it's all said and done, Lanier's really speaking about moderation. He's a champion of technology and it's sort of like the new book Hamlet's Blackberry, where the author reminds us that these are in fact age-old questions, finding the balance from the natural distraction from humanity that technology can offer.

Sit back, relax with your laptop, or smart phone. Play the video. And dig the opening instrumentation.

There's a lot up in there -- what do you think?


LINK, a Jewish, Art, and Technology initiative, opens the CJM as a laboratory to explore practical applications for forging new paths in Jewish education. LINK is a multidimensional initiative which brings together a monthly speaker series exploring the intersection of Judaism and new technologies, a year-long educator fellowship, and an innovative exhibition with web, gallery, and classroom components.
LINK is made possible by a generous grant from the Covenant Foundation. Additional support has been provided by the Koret Foundation and The David B. Gold Foundation.