Thoughts from scribe-in-residence Julie Seltzer on what she's writing, her process, and the experience of writing a Torah on public view.

When I first started this Torah project, the question shocked me each and every time. At one point I was keeping track of how often it was asked, as well as what percentage of the questioners were women and what percentage were men. When the count was high but about evenly-split between men and women, I stopped caring and simply lost track.
The question: "Can you write the Torah when you’re menstruating?”

I have a question, too. What is up with everyone’s obsession with blood?! And when did my bleeding cycle become public interest law?

Maybe that’s unfair. The Torah itself is a little obsessed with blood. Recently, I was writing a section of Leviticus that deals with a woman’s state of impurity following birth and the associative blood. She is considered in a state of tum’ah (generally translated as “impurity,” though Everett Fox in his infinite wisdom refuses to go this route and translates tum’ah as “tum’ah”). The new mother’s state is likened to that of her niddah, her menstrual state.

Blood comes up quite a bit in the Torah, and not just women’s blood. Moses turns the water of the Nile into blood. The priests sprinkle blood on the altar. Someone with a skin disease gets sacrificial blood placed on his ear, thumb, and toe.

Powerful substance!
So what about blood in connection with the Torah scroll? Well, we certainly wouldn’t want any blood to get on the Torah. Beyond problematic, that would just be yucky. But what about this holy object being touched–and perhaps even worse, written–by a woman in an “impure” state? There seems to be a widespread but mistaken belief that women are not permitted to touch the Torah because they might be bleeding. And perhaps in some communities this is the case. However, the shulchan aruch is clear on the issue:

Any impure person, even [a woman in] a niddah state…may hold a Torah scroll and read it. The words of Torah do not contract ritual impurity. (282:8)

The Torah is immune from my blood! Yay!

I calculated how long the Torah would take me to write if I did take a menstruation vacation every month. About 19 months instead of 14. And if I needed to wait seven white days following my period,* the Torah would take about two years. I can envision the gallery sign: “Scribe will be away from the gallery from Monday, June 21, until further notice. She will likely return Friday, June 25, but she’ll let us know that morning if she’s spotting. Thank you for visiting!”

* Couples that abstain from sexual relations during a women’s menstrual cycle wait anadditional week before the woman goes to the mikvah, at which point relations are resumed. 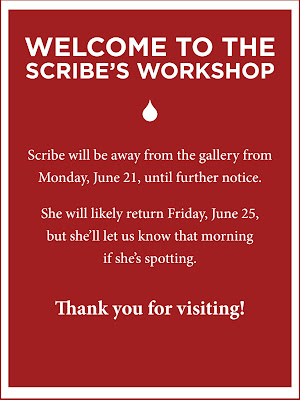 Jen Taylor Friedman said…
And there's more, just in case anyone tries to tell you that "incomplete Torah scrolls have different rules"...men can't get that kind of impurity, but they can get other sorts of impurity that work exactly the same from a halakhic perspective, and there is NOTHING ANYWHERE that says similarly-impure male scribes should refrain from writing. Nothing. The only, only, ONLY impurity that even might be a barrier to writing Torah scrolls is the one you get by contact with semen. And THAT one you can get rid of by a dunk in the mikvah before starting work, no need to count seven days or whatever.
June 25, 2010 at 12:06 PM

Anonymous said…
Hi Julie. I was the person who asked you this very question when you spoke to our tour group on Fri morning. I thought it was such an original question...apparently not! You suggested I check your blog so here I am. Thanks for the answer (not what I thought!). BTW - My family and I really enjoyed hearing you speak and seeing your work.
June 27, 2010 at 8:57 PM

Java4nechama said…
This is amazing- your visitors must feel really comfortable around you in order to ask this question.
June 28, 2010 at 10:30 PM