"What do you do when you make a mistake?"

Thoughts from scribe-in-residence Julie Seltzer on what she's writing, her process, and the experience of writing a Torah on public view.
One of the fascinating rules of sacred writing is the principle that a letter cannot be formed by an erasure. How could a letter be formed by erasure? Funny you should ask! I ran into the very possibility just today. 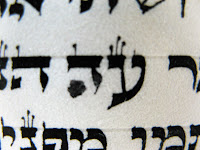 Here is a picture of (what is supposed to be) the Hebrew word עד, meaning “until.” As you can see, there is an ink drip to the left of the letter dalet. Of course, I want to remove this ink drip, but I can’t just scratch it off. Here’s why. The ink drip, located as it is in relation to the dalet, resembles the left leg of the letter hey. So, what we have here is not actually a dalet with an ink drop next to it, but an accidental hey. If I simply scratch off the ink drip, I form the letter dalet by carving out part of the letter hey. This would make not only the letter, but the Torah invalid. Follow the steps below to find out what I did instead: 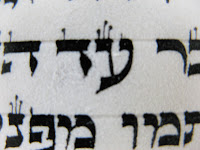 First, I scratch off the ink blob. Look, now it looks like a dalet! But, I can’t leave it this way, or else the newly-formed dalet – while accurate in appearance – is not kosher underneath, so to speak. Sort of like a pig, an animal that looks kosher from the outside, but is not kosher on the inside (the pig has split hooves but doesn’t chew its cud). 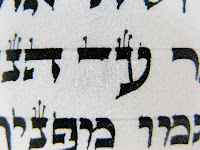 Now I scratch off the right leg of the dalet, leaving me with a simple “roof.” 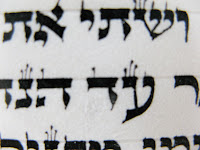 Next, I create the dalet anew by forming the right leg. Yes, this leg looks exactly the same as the one I just erased. But, as in many other Jewish practices, intention and order make a difference. I have now positively formed, kosher dalet. Voila!

Jen Taylor Friedman said…
And your writing's looking beautiful, dear girl. You make your teachers proud as proud :)
May 5, 2010 at 8:13 AM