"Get Out of My Airspace!" And Other Tales From the Torah Letters…

Thoughts from scribe-in-residence Julie Seltzer on what she's writing, her process, and the experience of writing a Torah on public view.
When I read the article in the J Weekly entitled “Leave me Alone! And Other Tales from the Torah Scribe,” I was pretty taken aback. Were my work habits so interesting to people that this reporter wanted to give them the “inside “scoop”? And where was everything I said about loving the opportunity to share Torah with people in such an unusual way? Hmmm. But, like everything else, I realized there must be some Torah here. And that’s when it hit me: "Scribe Realizes She is a Final Chaf.”
Fair enough: that title probably isn’t catchy enough for the newspaper, but that’s what blogs are for.
Allow me to explain. All letters in the Torah must be whole and unbroken (except for one purposely broken letter), and they cannot be touching each other. They must be entirely surrounded by parchment, separating them as individual letters. Letters combine with each other to form words and sentences and eventually an entire Torah, but first, each letter must be its own person, so to speak. They must be whole and complete in order to serve the larger function of integrating harmoniously with the adjacent letters.
Sometimes, a letter is defined not only by the ink strokes that form it, but by the air space it occupies. In the case of a final chaf (ך) for example, we know that a lamed (ל) cannot shoot up from the line underneath and ram into the leg of the final chaf, but what is not as well-known is that the lamed cannot shoot into the empty air space of the inner leg of the final chaf. This airspace is considered the final chaf’s personal space.
When I encountered this exact scenario of a lamed potentially shooting up in the airspace of a final chaf, I immediately thought of the article. This explains it! I am not a misanthrope; I am simply a final chaf! Like the final chaf, I desire to connect with the other letters. I want to share my unique role, and have them share their unique role with me. But as a final chaf, my boundaries were not as clearly or obviously delineated. So I had to mark the airspace with a more tangible barrier, to help me be whole and complete in order to share of myself. It doesn’t mean I want the other letters to leave me alone. Especially as a final letter, I wouldn’t even exist if there weren’t other letters looking towards me… 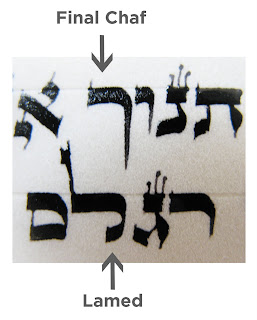