“That’s Julie Seltzer! I Invented Her Too!”

Thoughts from scribe-in-residence Julie Seltzer on what she's writing, her process, and the experience of writing a Torah on public view.
As I walked from the exhibit hall to the museum lobby, I stopped in my tracks when I saw the man walking up the stairs in the opposite direction. Rav Landes?!

Rabbi Daniel Landes is the director of the Pardes Institute for Jewish Studies, the yeshiva1 I attended in Jerusalem ten years ago. I have seen him a few times since then, on visits to Israel, but he was one of the last people I thought I’d run into in San Francisco, and at the museum no less!

It turns out that he was just as surprised to see me. Over coffee, he reported on his experience taking a museum tour. The docent pointed out the Hebrew word פרדס (Pardes), which is written out in very large structural letters on the entrance wall of the museum. Pardes means orchard, and represents four different levels of understanding the Torah, from the surface level to the most hidden level. The tour guide asked, “Does anyone know what Pardes is? Rav Landes showed his bag which featured that very word, since the institution he runs is named after this concept of Pardes! The visitors were impressed. Apparently, they thought that he actually invented the term, or at least the concept. Then, when the group then continued on to the Torah exhibit, and Rav Landes exclaimed in surprise, “That’s Julie Seltzer! I invented her too!”

He was joking, of course, though at this point the other people in the tour became suspicious that he was connected to every aspect of the museum, but I later told him that he was right. Learning at Pardes and being part of that community has influenced the direction of my life more than any other experience. In that sense, he did “invent” me. By taking a “break from normal life" to learn in Jerusalem for a year, a world of Jewish life and learning was opened to me. I did not know why I wanted to learn, but felt in my heart that it was where I should be. It was this opening that eventually led to my desire to write a Torah, and to experience Torah on all levels–from the black letters resting on the surface of the parchment, to the hidden meanings represented by the white space in-between. It was a good reminder that following our hearts (or our noses, or our kishkes2) can lead to totally unexpected, beautiful opportunities for growth and change. 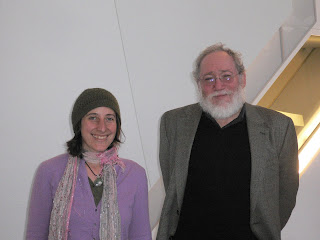 Julie Seltzer said…
Do any of you have yeshiva, or other Jewish education stories you would like to share? Why did you decide to go? How did it change you?
March 18, 2010 at 3:48 PM